UnNews:Sony fears that the PlayStation 4 will disappoint 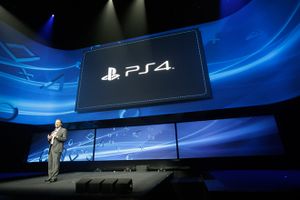 NYC, New York – The first few words that the CEO Andrew House let out were, "I've prepared myself, this is horrible."

"There was a point in mid 2010 where we had to destroy every single PlayStation 4 prototype out there," states Billy Custard, "at least four test systems were dubbed the PlayStation Toyota Attempt At A Sports Car."

CEO Andrew House spent the first five hours of the unveiling giving reason why customers will be disappointed, but what counters it and why they shouldn't be disappointed in the end. At least two times he made paradoxes.

When Q&As were going on, House was asked about pricing details. House regrettably stated, "more than what it's worth." Not all Q&As were answered after this, because House couldn't stop looking bad up there. Sony ended the Q&As early and played some video game demos for another hour. This was done behind the curtains, in order to hide the system from the people. The first demo was a game called God. The game was horrible looking, states many.

Many Sony fans had negative reactions after the unveiling of their favorite system. Some responses include:

Some negative responses came as soon as the confirmation came from Sony stating that the system will not be backward compatible. So all your favorite PS3 games can be sold on eBay and/or be thrown into the road. Besides, Trent thinks that only hardcore gamers w/ virginity will buy the console.

A minute before they were ready to show the new PS4, Sony ran out of time and were forced to keep it hidden from society. "Happy gaming, motherfuckers", states House. Many suggest that Sony were not done with the PS4, thus they avoiding showing the people what it looked like. Maybe by "disappointed" they meant "assassination worthy"? We may never know.