UnNews:Some guy does some stuff 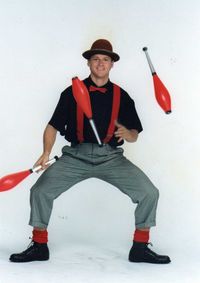 The guy that does stuff deep in the act of doing stuff.

SOMEWHERE -- The other day, this guy did some stuff that was pretty cool; so cool, in fact, that he inadvertently changed the laws of physics. I mean, the stuff that was done by this guy was so rad and original that crowds of people gathered around him to stare in awe. And everyone was like, "Say whaaaaa?" and the guy was like, "I know." And everyone was like, "Wow, what a revolutionary thing you're doing!" In fact, it was so unique and ingenious that this dude found out and he was all like, "I must contact this individual." So this dude calls up the guy who did the stuff and was like, "Man, you gotta come see me so we can discuss this." And then a bunch of scientists were called in and they like totally started doing experiments and stuff and the guy even won an award. Then, this professor guy announced that the stuff done by the guy proved Einstein's Theory of Relativity incorrect, while simultaneously proving the concept of a 6-dimensional spiral universe to be true. This caused magazines and newspapers all over the country to print an identical headline: "Guy's Doing of Stuff Affects Science." But that's not all. The stuff that this guy did also proved the existence of a utopian animistic deity, thus showing that every religion is wrong! And the Pope was all like, "This can't be true," but everyone's like, "Sorry dude, it is." Then, there was a mass conversion and everyone started following the new religion based on the guy's stuff. Then, some dudes at NASA realized that this guys stuff could allow a full human migration to a superior planet in another galaxy almost overnight. So everyone was like, "Why not?" and every person on Earth got into a big spaceship and went to this new planet. I tell you, that's some pretty badass stuff!