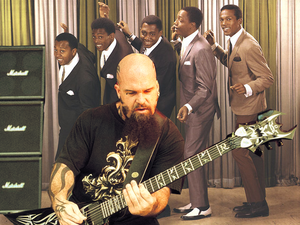 HUNTINGTON, California -- In a surprising move that has the metal world all shook up, thrash pioneers Slayer have announced that the opening act for their upcoming summer tour will be... The Temptations. Yep, you read that right: The legendary 1960s Motown group will open for the band known for such sunny oldies as "Raining Blood," "South of Heaven," "Seasons in the Abyss," "War Ensemble," and, ironically, "Temptation."

I was lucky enough to sit down with both groups and discuss this acid trip of a publicity stunt.

Whose idea was this anyway?
Kerry King (Lead guitar, Slayer): We [Slayer] were just playing the shit out of "Temptation" when we heard that Kool & The Gang would be opening for Van Halen on tour. Not to be outdone, [Slayer lead singer and bassist] Tom [Araya] said, "Why the fuck does Van Halen get to do cool shit like this? Who can we get to open for us on tour?" and I said, "Uh, I dunno, The Temptaions?" [Laughs]

Were you guys [The Temptations] surprised that Slayer had asked you to open for them?
Otis Williams (Last survivng original member, The Temptations): Hell yeah, we were surprised! You Damn right! We don't even know who the hell Slayer is, but their music would make my mama hang her head in shame. When we found out they were a metal band, I kept singing to myself, "It's just my imagination." I tried slapping myself repeatedly with a bass [the fish] until I realized I wasn't dreaming. Then we called them back and reluctantly said yes; we figured this would be a golden opportunity to introduce ourselves to a younger audience. Plus, we needed the money.

Are either or you gonna make changes to your sound or set?
Tom Araya: Nah. We're putting the pedal to the metal, brother!
Otis Williams: We know this audience well enough to know that we can only do three minutes of "My Girl" before they boo us off the stage. We'd never make it even two minutes into "Just My Imagination," "Papa Was a Rolling Stone," or "Sugar Pie Honey Bunch."
Joe Herndon (Bass singer, Temptations): We didn't do "Sugar Pie Honey Bunch." That was The Four Tops!
Otis Williams: Another thing! How many years can I keep singing "My Girl" without sounding like a pedophile? It shouldn't be "My Girl," it should be "My Woman." We're gonna be a little more PC about that this time around.

Kerry, aren't you afraid you're gonna piss off a lot of Slayer fans?
Kerry King: Bah, who gives a fucking shit? We're just hear to have a good time, right?

The Slayer & Temptations Just Your Imagination Tour kicks off in June 2012.