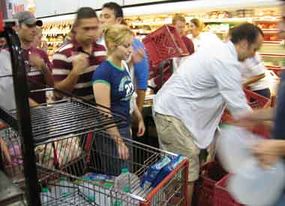 Water is the featured shoplifting item of the month at WalMart

BOSTON, Massachusetts - The weather in the northern United States has been dry and humid for over 3 months. With less than 1 inch of rain in this period, residents of northern states are becoming increasingly irritable. With the lack of water in any form, other than drool, most people have been forced to shoplift water from stores who don't notice such as WalMart and...well, just WalMart. Many citizens have also been spotted stealing water illegally from town water fountains and carrying it away in paper bags. This has turned out to be a fairly useless idea, as the water tends to leak out almost instantly. Towns have put bans on outdoor watering for the time being. Some radical towns are even cutting off water supplies to residents, causing many big lawsuits and the problem of over crowded morgues, because reservoirs have run out and all the reserves are being used by the mayor for his 8 swimming pools and 36 fountains.

Most farmers should be picking their crops this time of year, but lack of rain hasn't allowed the growth of these crops. Even though most farmers have wells, and tend to drool on their crops extensively during times of drought, the extreme lack of rain has caused their wells to dry up completely this season, and no amount of drooling can make up for this loss.Along with the food shortage, residents are forced to import fresh produce from other states. The mayor has put a ban on the importation due to the increasing lawsuits filed by local farmers claiming they are being "left out of the circle." The now illegal importation still continues and the farmers of the state are being left out more and more causing whats left of the state farming industry to wilt and disappear from existance.

Drug addicts were also greatly affected by this watering ban. Without water, the local crop of poppies, marijuana, and cocaine decreased. This has sparked outrage in drug addicts around the Northeast, and most dealers have left the state to push their dope in places with more water. Consequently, many drug addicts were turned away from plant-based drugs and left to find other drugs such as inhalants like Lysol. Many marijuana addicts turned toward smoking, which has helped boost the state's declining revenue. 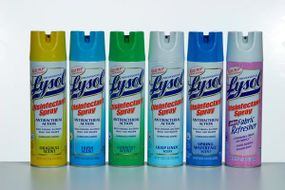 New drug of choice in Boston. Now in 6 invigorating scents!

With this severe lack of drugs, there comes consequences; MIT has seen a fallout in the number of parties that are thrown on campus. Research shows the number of parties falling from 1 to 0 per year. Local nerds have become even more suicidal with this lack of parties. No longer are there invigorating study "parties" in which the nerds bring drugs for the sole purpose of staring at them and saying "wow...we're looking at drugs...we're so BAD!!!".

Angry farmers and addicts crowded City Hall to protest their lack of income and the water ban. When protesters questioned Mayor Menino about the bans, he gave a highly intricate response. "W-Well the w-wa-water in the reservoirs has b-been completely u-used up. We all k-know w-we are in d-desperate n-need of some r-rain w-w-water. Wh-What the hell else do y-you all need to know?" The mayor was unavailable to UnNews reporters after the conference because he was soaking in his hot tub, suffering from massive cocaine withdrawal. The forecast shows sunny with no chance of rain for the rest of the month. With this situation getting out of hand, there still seems to be no end in sight for the madness.