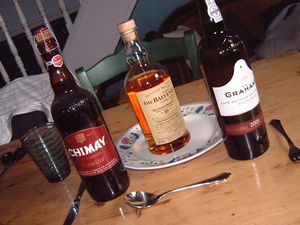 Persil originally began its life as Anti-freeze in wine bottles. Nowdays it is most effective for removing tough stains in white clothes.

London, UK - It has recently come into the view of the public that all of the scientists from the top leading universities of England use the washing detergent Persil to clean their labcoats.

In the past year, there has been a strangely large-scale debate among journalists and supermarkets as to what type of cleaning detergent scientists use to keep their white coats clean. It was agreed among both sides of the argument that since scientists barely do any work at all, then they must use some sort of regular detergent. Many agreed that the scientists must be using Cillit Bang, whilst others thought it must be Daz. The argument reached a peak yesterday when supporters of Daz broke into scientist homes in the hope of discovering the true detergent used. Whilst the supporters raided the underwear, police were called to the scene to arrest the supporters.

Earlier today the leading scientists, in the hope of deterring any more break-ins into their homes, revealed that they use the brand Persil to keep their whites brilliantly white. When questioned as to whether Bio or Non-Bio versions are used, the scientists refused to comment.

Since this revelation, many members of the public have switched to Persil as their main detergent. Many children now want to be scientists when they grow up, so they can have such clean clothes. Areas such as policing and fire service have begun to use Persil to achieve the same whiteness in their clothes.

Persil has received a mass marketing boost from the publicity given to them by the scientists, and their profits are the highest in over 5 years, totalling over 13 million pounds.

This article features first-hand journalism by an UnNews correspondent.
Retrieved from "http://en.uncyclopedia.co/w/index.php?title=UnNews:Scientists_use_Persil&oldid=5688470"
Categories: