UnNews:Scientist experimenting on coffee arrested for blowing up universe 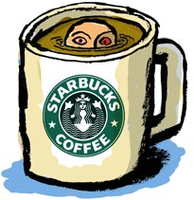 Police photo of the crime scene, presumably showing the scientist attempting to escape charges by hiding in the dangerous beverage.

"But eet vahs onlee en acceedent!" protested physicist Dr. Đùşśąŀəĥøæß, the researcher in question. "I fink you haff takeen thees tohrtalee out ohf prohpohrsheen!" The police, however, were not amused. "Ignorance of the law is no excuse!" one officer informed the scientist. "Everyone knows blowing up the universe without a proper license is illegal in the United States!"

According to laboratory staff, Đùşśąŀəĥøæß had previously speculated on the possibility of creating a modified version of the drink with a cherry on top, but was unable to do so due to an extremely prohibitive budget. However, thanks to a bit of help from some friends of his, Đùşśąŀəĥøæß was able to obtain a rare sample of the beverage taken before its mysterious disappearance from the Starbucks where it had been prepared to order for Dane Earl Johnson, Jr. at the cost of the entire planet's water supply.

The experiment was performed early yesterday morning, before any of the other laboratory staff arrived for work. Rigorous inspection of the crime scene reveals that a small sample placed in a test tube was used for the test. Upon closer inspection the remnants of the cherry pit were discovered buried in the far wall of the laboratory. Several of Đùşśąŀəĥøæß's colleagues have estimated that the subsequent explosion destroyed everything in the known universe, but soon Jesus and his aide Stephen Hawking were able to restore order and bring it all back before people noticed and chaos ensued.

No one was injured during the explosion, although the lab is expected to be fined well over infinity bazillion dollars to cover the cost of rebuilding the Universe. Đùşśąŀəĥøæß himself was not available for comment.