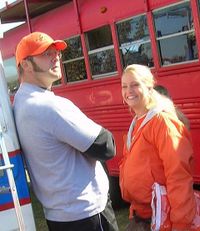 ATTALLA, AL - James Dean Sausage Company, which bills itself as being “hams and loins above the rest,” admitted that its first television commercial might have been “too hammy” for viewers. In response to complaints by grocers, meat markets, and individual consumers, the company gave the axe to future broadcasts of the advertisement in which giggles and wide-eyed stares by his coed high school students alert a handsome young male sex education teacher that he has forgotten to zip his fly after visiting the men’s room between classes.

On the chalkboard, the teacher has written a list of sexual slang terms, including “sausage,” as a euphemism for “penis,” and he is discussing this term when the girls’ giggles alert him to his memory lapse. Quickly turning his back to the class, he zips his fly.

At the end of the spot, the following caption appears on the screen: “Brought to you by Meat-Packers of America” and, in smaller text, “A Subsidiary of James Dean Sausage Company.”

“We goofed,” the company’s president, Peter E. Derr, told Unnews’ reporter Lotta Lies. “The ad was supposed to be funny, in a campy kind of way, but it didn’t resonate with voyeurs viewers.”

As a result of consumer and client complaints, the sausage company has had the teacher edited out of the commercial. In addition, it has re-recorded the soundtrack, which, originally, included both the lyrics and the music of a tune, “The Penis Song,“ that is popular on Internet websites, among adolescents. The new version of the tune is “completely instrumental,” Derr assured his clients.

The sausage commercial was inspired, the president said, by an ad for Carl Jr.’s and Hardee’s, which featured a beautiful young female teacher clad in a tight, form-fitting dress. As her students sing a rap song about “flat buns,” she dances upon her desktop and touches her buttocks in a suggestive manner. Educators across the country voiced their complaints loudly and clearly, seconded by students’ parents, finding the ad to be in “bad taste.”

Tennessee Education Association president Bunny Burgher characterized the fast-food chains’ ad as “unbelievably demeaning,” and contended that “high school boys would never behave in such a manner, rapping about a female teacher’s body,” although, she admitted, several female teachers have had sexual intercourse with male students recently.

As a result of such criticism, the sexy teacher was expelled from the spot, but the rap song “I Like Flat Buns,” has been retained. The compromise seems to have appeased the commercial’s critics.

“Just as we were inspired by the Carl Jr.’s and Hardee’s ad, we’ve also been inspired by the solution they took to remedy the problem their ad created. We are also expelling our teacher, along with his suggestive sausage references, but retaining ‘The Penis Song,’ as instrumental mood music.”

Asked whether he thought this action would end the controversy, Derr replied, “All I can say is that we admit we’ve pulled a boner, and we’re doing all we can to satisfy our clients and their johns customers.”