UnNews:Pope says 'The Big Bang Theory' is a good show 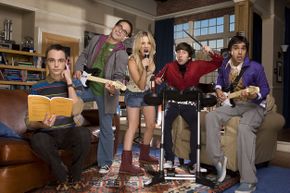 Approved and blessed by His Holiness.

VATICAN CITY -- On Thursday Pope Benedict XVI gave a sermon at Saint Peter's Basilica to commemorate Epiphany, the Christian holy day honoring the Magi visiting the Christ child. At one point during the sermon, the Pope became sidetracked and starting rambling about the CBS sitcom The Big Bang Theory.

The Pope went on to say Leonard's efforts to date Penny is, "symbolic of the continual struggle to have a relationship with Christ," and called Sheldon, "a true Catholic" for "his very ordered lifestyle and his devotion to sexual abstinence." He referred to the character Howard, who lives with his mother, for being "clearly allegory to the Jewish peoples' close relationship to Mother Church." The Pope also praised the show's laugh track and multiple-camera setup for "showing dedication to tradition amidst a world of constant change." He stated that Catholics should "be cautioned, yet not completely turned off" by the fact that the show was written by the creator of Two and a Half Men. Finally, he called the opening theme song by Barenaked Ladies "Heaven's music," which is, "fitting for a show where the characters' concern is the majestic power of the heavens." After this, Pope Benedict returned to the subject of the three wise men's holy gifts to Baby Jesus, never mentioning the televison show again, except when he concluded the sermon by exclaiming Sheldon's catchphrase, "Bazinga!"

Many Catholic theologians question why the Pope felt the need to promote an American sitcom in a sermon. Some infer that he's trying to reach out to a new generation, making Catholicism "hip," while attempting to make up for the Church's bad blood with scientific culture for centuries. Others believe he's simply going senile. The fact that the Holy Father wants to make "Rock, Paper, Scissors, Lizard, Spock" part of the official Papal conclave seems to be evidence of the latter hypothesis.

The Big Bang Theory airs Thursday nights at 8/7c on CBS and Monday through Friday at 19:30 on Italia 1 at the Vatican.