UnNews:Palin refuses to answer debate questions until after the event 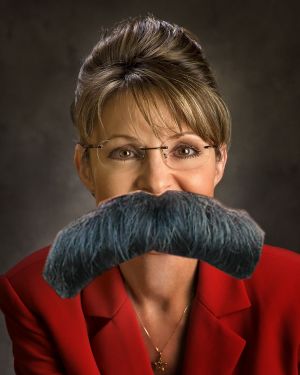 The move was announced following a refusal to forward the questions to Palin the day before the event for she could "cram" for the event.

For his part Democratic Senator Joseph Biden of Delaware, the Democratic Party Vice Presidential nominee, who is well known for his ongoing, wordy comments, was relatively speechless.

"This is utterly astounding - how can anyone call the event a debate if Governor Palin just stands there and smiles? And then to think she wants to be able answer the questions, and my response to those same questions, the day after the event? The audacity of this is dumbfounding, leading me to make the shortest public statement of my political career. Amazing!"

Palin's handlers decided to make the move after Palin's awkward interview with CBS anchor Katie Couric on Wednesday evening. During the interview, Couric repeatedly asked the Alaskan Governor to back up her assertions that running mate John McCain supported more regulation of U.S. investment firms and real estate mortgage underwriting during his twenty-four years in the United States House of Representatives and U.S. Senate. Twice, Palin answered the question with a prepared statement not having anything to do with with the question asked.

Couric then repeated the question, saying "Governor, let me repeat the question one more time, using small, one syllable words," challenging Palin to list laws sponsored and supported by McCain that would have regulated the financial markets to which Palin responded: "Well, golly, Katie, I can't think of any but when I leave this interview I'll look 'um up and send the information to 'ya."

Upon hearing of the interview, and seeing the nation on the verge of a banking collapse, the world being challenged by a more confident Russia and global warming, the McCain's campaign hit its panic button and changed direction - this time its plan is to sabotage McCain's bid for the Presidency by suspending the campaign.

"Upon closer inspectuion, I am seriously considering shooting myself in the foot and setting Senator Obama up to take the fall as this problems of the nation far outweigh my abilities," said McCain.