UnNews:Osama back from paradise; complains about heavenly rewards 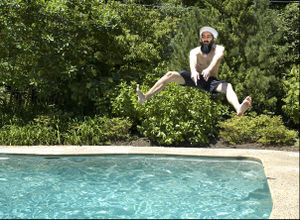 Osama bin Laden in paradise, trying a cannonball in the general direction of Mecca

PARADISE, Heaven -- Osama bin Laden, deceased leader of Al-Qaida, returned from Paradise today after one year of being dead and enjoying the heavenly rewards for his earthly terrorist career. "Having 72 virgins obliging your every wish sounds truly great at first, but after a while it gets pretty tedious" commented bin Laden at an ad hoc press conference at some undisclosed place in the Middle East (videos for his fans are available soon). He added that "the girls are chattering away all the time and demand so much of your attention that your head is spinning. Furthermore, the very fact of their virginity is at least debatable after a while. They say things are different in Paradise and that a virgin stays a virgin even after long nights of heavenly orgies, but it somehow does not feel right. As for the rest, I can testify that Paradise is a particularly dull place. I'd rather stay in a comfortable desert of my choice, in a snug earth hole or concrete pipe. I'm almost jealous of my corpse back on Earth, which is resting at the bottom of the Ocean at some undisclosed location. Swimming with the sharks would be a lot more romantic than trying to please all those nymphos!"

Being back on Earth, Osama stated that he will reassume leadership of Al-Qaida and make new plans. "I've heard that they are rebuilding the World Trade Center even bigger and nicer than before. I appreciate that, make no mistake! I'm quite eager to see the place, walk around it and think of some new trick I could pull. The only thing that bothers me is that I might get 144 virgins next time. I don't think I could cope."