UnNews:Only good press on Olympics to be allowed 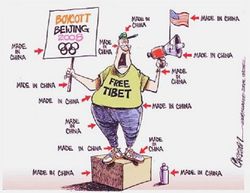 BEIJING - UNN In a move that shocked no one, the Chinese Government today announced that it will block the dissemination of unflattering news by foreign correspondents covering the 2008 Olympics opening in Beijing on August 8, 2008.

The Chinese government had promised the Olympic committee that all media attending and covering the event would have free reign over its coverage. However now that the games are eight days away, the Beijing Government has changed its mind saying "It too late to back out now you capitalistic pigs."

Officially, the Chinese government will permit foreign media outlets to cover the games, however restrictions will be in place to ensure that world does not get a false impression of the few people who could spoil the event.

"Reporters for media outlets not based in China will have free speech rights guaranteed in reporting Chinese athletes and expected Chinese gold medal performances," said Huan Min of the People's Republic of China's Freedom Olympic Media Ministry. "However as a service to the world, we will not let western media outlets despoil the carefully crafted drama planned by the people of China."

Reporters have been advised that they are "free to report the numerous wins planned by Chinese athletes," however "the Ministry reserves the right to step in when reporters attempt to cover those events where the glorious revolution of Chinese athleticism is tricked into defeat by capitalist counter-Chinese athletes."

When queried about this situation, Olympic Committee member Emilio Suarez of Spain said simply "Our inscrutible hosts have us over a barrel."

The Chinese Government also announced today that higher than normal smog levels in Beijing are expected during the international event, and that air quality will be so poor that televising events such as the Decathlon, all track and field events, and any other outdoor activity will mean that cameras and video equipment, and the lungs of non-Chinese athletes will be rendered useless.