UnNews:Oil spill: Other US political party is sorry it was sorry 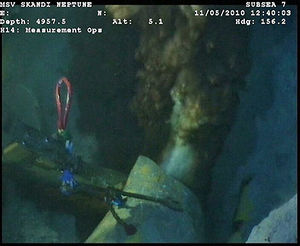 Slimy stuff is still gushing forth.

WASHINGTON, D.C. -- The U.S. opposition party in Congress has taken decisive action on the Gulf oil spill--opening a new hole--in its own foot.

The spill, now entering its third month, has seen President Obama keep foreign vessels from assisting, deny approval for local clean-up efforts, and otherwise make Bush and FEMA look positively responsive in comparison. But there has been no statement from the opposition party, whose name was not immediately available.

Finally, Rep. Joe Barton of Texas publicly disagreed with Mr. Obama for insisting that BP let him administer its fund to compensate victims, and also pay victims of Mr. Obama's own decision to shut down the industry. Rep. Barton, indefensibly, called this shakedown a "shakedown." Moreover, he apologized to BP.

Party leaders, whose names no one knows, reportedly threatened Rep. Barton with his ranking position on House committees for not understanding that Congress is conducting a Kabuki dance and BP is the villain. Friday morning, Rep. Barton said, with appropriate lack of conviction, "If anything I said has been misconstrued, I apologize for that misconstruction." Got that? Regretting that you took my comments the wrong way is how apologies are done in Washington. Later, leadership twisted off Rep. Barton's remaining arm and he issued a written statement: "I retract my apology to BP."

So, after two months, the Administration's line is: If you choose to invest in America but I need a new "ass to kick," you are pwned. And the opposition's line is: Me too. U.S. voters can choose between these two distinct approaches in November.