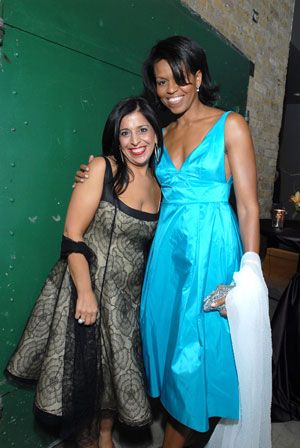 Michelle Obama tells white friend, "Bi-otch, if you were as hot as me, your man would take you out to Broadway and eat you out later rather then do the job he was elected to do."

NEW YORK CITY, New York - Barack Obama, taking a page from Caeser Nero of the Roman Empire about 1,900 years ago, took his wife Michelle out to New York City tonight.

"Sure America is crumbling as a world power", Obama said, "And other nations like China and India, not to mention the European Union, are poised to surpass us in importance. But my wife - and you've seen how hot she is - wanted to go party, so I did. After all, I promised."

Not explained was why he had broke such promises as closing our Concentration Camp in Gitmo, ending torture, and holding war crime trials for those who had broke the Constitution, the Geneva Convention and Jehovah's natural law as described in the Bible.

"If you knew Michelle, you'd know that there are some things you'd best follow through on", said Obama before releasing a statement in which he swore that in spite of her idiotic statements, Sotomayor was really a legal genius.

This latest promise of Obama (that of taking his hot and sexy wife out on a date) is believed by a very liberal and Obama-loving press to be the ONLY promise he's kept so far. If that doesn't tell you something, nothing will.

We all attempted to contact Obama later for a comment, but after knocking on the hotel room door, all we heard was, "Ohhhh, you're the King baby....you're the Reverend Doctor Martin Luther King, Junior!!!!!!"

Republican representative and kill joy Newt Gingrich complained, but admitted that if he had a wife as hot - or a girl friend as hot - that he'd do the same.

When approached for a comment, Speaker of the House Nancy Pelosi said, "No, my titties are obviously not as suckable and sweet tasting as Michelle's!!! But I can assure you that I've never been briefed upon the suckability and sweetness of Michelle Obama's titties and am only guessing based upon her being half my age and twice my looks!! I can only speculate as to how suckable they are, but frankly, when I reminisce about my college days, I long to see - or taste - for myself!!"