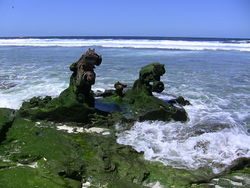 The entire island was left devastated by the North's vicious attack. No human life will be sustained on the 0.81 sq mile island ever again.

"Today is [a most] glorious day for the people of Best Korea," Jong-Un declared during an interview with the Korean Central News Agency, North Korea's only and highest-rated news network. "The great soldiers of North Korea massacred the entire island and suffered only a single fatality."

The name of the heroic soldier who gave his life defending North Korea from the evil American empire was not immediately released, but the Supreme Leader has promised a nationwide extravaganza in his honor. Early reports indicate the soldier will be given a traditional 21-ballistic missile launch salute. The missiles will be recycled from those used during the 1950s Korean War, as the Supreme Leader believes in protecting the environment.

And in a show of solidarity to the late soldiers family, Kim Jong-Un promised he would, "feast for two tonight."

When asked for comment on the successful North Korean attack, White House spokesman Jay Carney stuttered, "You mean those, uh, guys who took a canoe to Baker Island, ran around yelling, and one of them ended up dying? Is that what you're talking about? Yeah, our drones recorded that. Funny stuff."

"That guy probably keeled over from hunger or something; they all looked very malnourished," besmirched the cowardly Carney, hiding behind his oak podium. "And they said they were launching missiles in the starved dude's honor? Let me guess, they'll be leftovers from the Korea War, won't they? Hah! North Korea's so isolated they're stuck using leftover armaments from 60 years ago. Real frightening."

According to the Korean Central News Agency, even the US Census Bureau admits North Korea's successful annihilation of the populous of Baker Island. Their most recent count indicates there isn't a single living person on there.