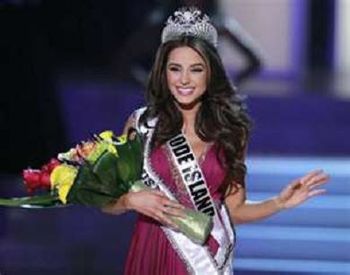 If this photo is any indication, Miss USA certainly didn't have any breast or booty augmentation, as Miss Pennsylvania alleges, nor is her figure 36-24-36, as she herself claims.

MISS, USA – Did she or didn't she? Maybe only Olivia Culpo's plastic surgeon knows for sure, but the Miss USA beauty pageant winner may not have won the contest in a “fair and square manner,” Miss Pennsylvania, aka Sheena Monnin, charges. “The bitch obviously had breast augmentation and surgical enhancements to her booty. I wouldn't be surprised if she was born a he, if you know what I mean.”

The contest was a “fraud,” Miss Pennsylvania said.

Another contestant, who refused to say what state she is supposed to be, supported Miss Pennsylvania's claim. “I heard him talking to The Donald, and he confessed to him that he's a transsexual.”

“Miss USA,” the eavesdropper witness clarified. “Of course, he was only Miss Rhode Island then.”

“Miss USA is not now, nor has she ever been, a man,” Trump said. He said he “knows for sure,” having “first hand knowledge” of the pageant winner's “sex and gender,” as he does of all the other contestants' “female equipment.”

“She's the real deal,” Shugart said. “We make all our contestants submit to a medical examination, a battery of chemical tests, lie-detector tests, and up-close-and-personal examinations by Mr. Trump and me. There's no way any of our girls were ever boys, except, perhaps, in Miss Pennsylvania's wildest fantasies.”

Trump said, “I think that Miss Pennsylvania is a repressed transphobic bisexual.” He also denied that Miss USA ever received any “surgical assistance or needed any.” Olivia Culpo “could have been a Playboy Playmate,” Trump said, “and may be yet, if Hef [Hugh Hefner] gets his way.”

“It's a case of sour grapes,” Shugart agreed.

Asked whether he was interested in featuring the pageant winner in his magazine, Hefner said, “That depends on two things: how much Donald Trump is willing to pay me and whether Miss USA is as good in bed as she is on stage.”