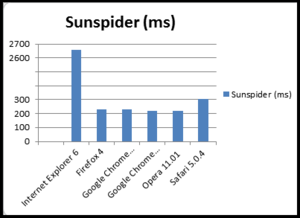 REDMOND, Washington -- After the release of IE9 for Windows, Microsoft releases the long-awaited IE6 for the Mac. Speaking at the announcement of the release, Microsoft CEO Steve Ballmer said, "We haven't updated IE5 on the Mac since 2003. This release finally bring everyone's favorite browser to the Mac. Now Mac users can experience our web standards and all the viruses that Windows users have enjoyed for years." According to analytics company NetApplications, IE6 currently hold an 11% market share. Microsoft hopes this number will increase and expects enterprise customers to be the first adopters.

In their press announcement, Microsoft also showed benchmark results for IE6, comparing it to other browsers on the market. A Microsoft representative stated, "We wanted to make sure IE6 was as slow as possible. Our studies of Mac user behavior show that Mac users like to use as much of their time as possible looking at the beauty of Mac OS X and Apple design. The slow speed allows them to take all the time they need." When questioned about not including tabbed browsing, the rep stated, "We wanted to keep the browser on Mac free from clutter. We believe Mac users will appreciate that."

Sources close to the company say that Microsoft is also expecting to release a version of IE6 for iOS devices. Steve Jobs could not be reached for comment.