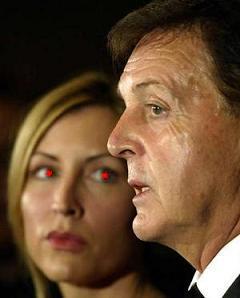 IT HAS BEEN REVEALED THAT former Rolling Stones frontman Paul McCartney has offered his estranged wife (the evil) Heather Mills a divorce settlement of a new shoe, Unnews reported next week.

Quoting a series of authentically fabricated sources, Unnews said that Sir Paul initially offered Mills a "nice, sensible walking shoe", but Mills's legal team had negotiated that up to "a durable, waterproofed hiking boot". One source suggested that "with the inclusion of a thermal sock we may be tantalisingly close to a deal".

Media reports have suggested that (the evil) Heather Mills, 39, was seeking up to three shoes, each to be supplied with a lifetime supply of appropriate polishes and cleaning products. Sir Pauls team rejected these claims "as outrageous" and threatened to have the money grabbing trollop killed.

Heather hilariously lost a leg a while ago.