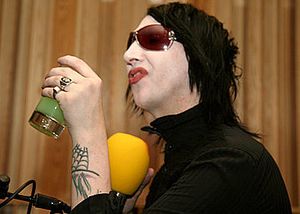 Marilyn Manson on the Graham Norton Show, yesterday, or, innuendo within imagery

BBC Studios, London -- Yesterday, Marilyn Manson appeared on "Graham Norton Uncut", which aired at 11:05pm on BBC2. He starred alongside Nigella Lawson, Rihanna and some dude from the audience who ate fermented herring, a swedish "delicacy".

During Norton's interviewing of the three stars, Manson took it upon hisself to interject, for no evident nor relevant reason:

Manson did not elaborate on this, for reasons left for the viewer to decide.

The entire show was described as "somewhat surreal" by viewers, as the three celebrity guests together were quite a combination, but Manson's public "coming-out" took its toll with a handful of complaints and a number of suicide notes being written by despondent fans adamant to marry the superstar. In fact, the only incident that has caused more suicides was when Manson got married to Dita Von Teese. These suicides, sadly, could not be undone when he got divorced.

Norton's invitation for Manson to fellate him, "in a non-gay way", were met with the camera quickly cutting away from Manson's face. However, it can be assumed that, due to Manson's claims that his homosexual experience wasn't homosexual at all, it was met with a slight bemused sneer.