UnNews:Man who claimed to have found God arrested for wasting police time 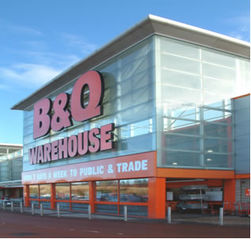 If God was everywhere, it would include this Stoke branch of B&Q

BRISTOL, England - George Fasarta, the Bristolian who claimed to have found God, has been charged with ‘Wasting Police Time’ by local police. Excitement spread all around the Christian world last week, as it was reported that Fasarta, a 42-year-old baker from the north of the city, had definitely located the Almighty who had been missing/presumed dead for almost 2000 years. But now police say they believe Fasarta was simply an attention seeker who repeatedly changed his story.

“His directions to God’s supposed location kept changing every time we asked him,” commented Detective Superintendent Bob Watcher. “In his initial statement, he simply said that God was everywhere. When we asked him to be more specific, he pointed out the window and said ‘in the trees’ before further announcing, 'he’s in this room, he’s in the air that I breathe, he’s in me, he’s in you.’”

Watcher continued, “We conducted a thorough search of the trees, the room in which we were sitting, the body of George Fasarta and my own personal body. We do admit that we couldn’t fully locate all the air that Fasarta had breathed, but we found most of it in a finger-tip exhale search. We still have God’s DNA from our Great Flood investigation, so are confident that neither God, nor any member of his family, has visited any of these locations.”

Fasarta was further questioned as to how he had initially located God. He reportedly claimed that he had found God through a contact of his named Jesus Christ. The only Jesus Christ found on any records were those of the Israeli security services. Their records showed he had died over 2000 years ago. When this was put to Fasarta, he argued that Jesus had risen from the dead, removed a giant boulder from his tomb and gone to see twelve of his mates. At this point the interview was terminated. “The last thing I’d do if I had just risen from the dead would be to attempt to remove a massive rock,” commented Watcher.

“I know we don’t have the death penalty in this country”, Superintendent Watcher continued, “but this man has wasted so many people’s time, we’re hoping that the CPS will try and at least go for a hanging if not a full crucifixion.”