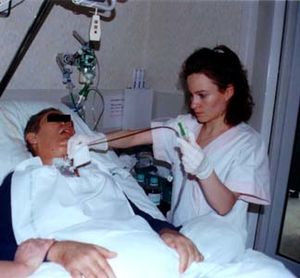 Cyrus back in the day.

NEW YORK, New York - After lying comotose for twenty-five years, two of those on purpose, Cyrus Timble, 52, suddenly awoke yesterday and greeted his nurse with a cheery "'ello, what's new darlin'?", and started in asking questions. Timble, a now unretired fast food manager, didn't get the answers he wanted, got dressed, and marched right down to City Hall.

After politely asking more questions, and getting many more answers he certainly didn't want, Timble called a press conference. "'ello. Can someone here tell me just what the hell is going on?" he asked the assembled reporters. "What's with these wars? Didn't anyone complain and arrest some people? Where is the steel from the World Trade Center--wasn't it evidence? And what in the realm of bloody hell are those things" Timble asked, pointing to the ipads and laptops and cell phones everyone was chattering away on.

"And did you guys know John Kennedy Jr. died? Wasn't he supposed to be president by now? What's up with the black guy? The Queen is still alive? Citizen Kane is coming out in 3-D?"

Confused, rambling, and quickly dehydrating, Timble grabbed CNN reporter Anderson Cooper by the turtleneck and demanded to know why the air smelled so bad. "And why does coffee cost so much, and how come it's so fancy?"

Cooper, brushing himself off and combing his hair, turned the questioning on Timble.

"Who paid for your coma? Did you see angels? Could you hear anything?" Cooper asked.

"What's a euro? How much is my Enron stock worth? Where are the ashtrays?" Timble replied.

"Are bedsores painful? Did they leave the lights on?" Cooper queried.

"Eight shows are a season? Marijuana is medicine?" Timble mumbled.

"How long did it take you to move your big toe?" Cooper enjoined.

Timble left the presser, walked into a bar, then, being a proud man and remembering the strange man's question, walked back to the hospital. "How much do I owe you," he asked, getting out his wallet. Told how much, his jaw dropped and his hair turned white, and children pointed and twittered about it all day long.

This article features first-hand journalism by an UnNews correspondent.
Retrieved from "http://en.uncyclopedia.co/w/index.php?title=UnNews:Man_awakes_from_25_year_coma,_gets_irritated&oldid=5714220"
Categories: