UnNews:MIB International soundtrack to be replaced 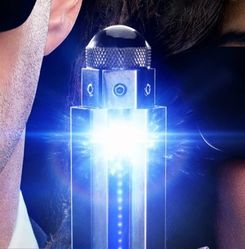 If only it were that easy.

HOLLYWOOD, CA - In a desperate attempt to salvage the sinking box office profits of MIB: International, Columbia Pictures has announced that it'll replace the soundtrack of the film to resolve around one song. Men in Black by Will Smith.

"Judging by how the song made the first film a huge success, we determined that if we incorporate it into every scene, we could increase film profits by 3,000%" said Sony Pictures COO Robert Lawson.

Columbia Pictures released the replaced version of the film with the new soundtrack into selected theaters and the moviegoers are not liking it one bit, with a majority consensus saying that it detracts from the film.

"This is whatever I expected from whatever company brought me The Emoji Movie", said Sarah, 23, who's previous favorite song was Men in Black by Will Smith.

Regardless of the negative criticism, Columbia Pictures intends to release the new version into more theaters nationwide, in hopes that it'll help buoy the boat before Spider-Man bails them out.