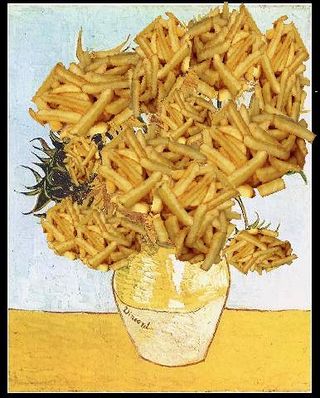 Newark, NEW JERSEY - Police, lawyers, and chefs were called to a westside Newark home today after Fernando Swizzlestick, 28, a local mailman and a temporary guest in the home, dropped a vase and refused to pay for it.

"JUST LOOK AT IT!!!" screamed the distraught postal worker while being wrestled to the ground by police and law school co-eds. "MY GOD IN HEAVEN WHAT IS THAT THING??" Swizzlestick hysterically cried as he pointed at the unbroken vase sitting upright on the yellow floor next to a table where it had previously rested. "I WALKED INTO THE HALLWAY TO GET THE GUYS SIGNATURE ON A REGISTERED LETTER, AND THERE IT WAS!!! JUST LOOK AT IT!!!"

"He must pay," said homeowner Zack Wheat, "for the vase."

Upon hearing this, Swizzlestick, a constant irritant to Wheat's dog who can't figure out why the mailman walks the streets during non-walking hours, screamed "I GOTTA GET OUT OF HERE" and came within a hair's breadth of hyperventilating his way to the door before he was captured, tackled, and wrestled to the ground again.

"KEEP YOUR KNUCKLES ON THE OUTSIDE OF YOUR FIST," he screamed at a busty chef busily handcuffing his still pointing index finger to a decorative lionshead fountain, "JUST LOOK AT IT!!!"

When the assembled subduers of justice finally finished congratulating each other, trading phone numbers, and chatting-up the blonde, they turned around to take a quick look at what Swizzlestick was pointing at. There, somehow contained within a priceless 14th Century Ming Dynasty vase, they saw a hideous subliminally moving french fry plant smelling like the inside of a poorly sanitized fast food outlet and emitting raging internal squishy oily corpsey sounds while uninhibitedly growing to an unbelievably enormous size. They suddenly screamed, trembled, and wet their pants while involuntarily pointing at the vase. "MY GOD IN HEAVEN WHAT IS THAT THING??" yelled a policewoman from an earlier generation and the next precinct over. "JUST LOOK AT IT!!!" exclaimed a passing child. "BREAK THIS BUGGER'S NOSE" enjoined a culinary artist still kneeling on Swizzelstick's chest with the full weight of gauche artistic acrimony.

A camera-crew from a local station worked their way through the panic and chaos breaking out in the neighborhood and barged into the hallway, trailing dirt and sod and the dog's squeaky toys in from the lawn, coming within a hair's breath of stepping on fingers and knuckles while holding their massive cameras chandelier high in a subconscious attempt to brain the neighborhood children who'd climbed on the backs, fronts, and shoulders of policemen and storytellers for a better view of the atrocity. "MY GOD IN HEAVEN WHAT IS THAT THING??" an unpopular but contracted oriental newsreader screamed to her viewers before an ad for Zinoflex Tablets cut her off in mid-hysteria. Faint screams could then be heard from TV viewers all across the city and down U.S. Route 1 towards Trenton: "MY GOD IN HEAVEN WHAT IS THAT THING??", or the even more popular "JUST LOOK AT IT!!!". By the time the newscast returned and the oriental newsreader had donned ceremonial robes and was burning incense a mile-a-minute, the SWAT team had arrived, and everybody was forced to hug the ground while still involuntarily pointing with shaking fingers along Wheat's well-sanded flooring and superior hardwood baseboards "MY GOD IN..." 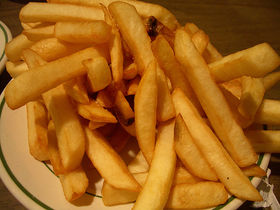 The National Guard and the big boys from the networks finally showed up, dozens of intense, well-dressed and well-armed troops and journalists stealthily storming into the hallway, indiscrimately crunching hand and finger bones underfoot, tossing children hither and yon, and efficiently forming a perfect circle of high-powered weaponry and iTablets around the 14th century Ming Dynasty vase containing the noisily blooming french fry plant. The room was suddenly as still as a busboy's tomb and frozen like a game of statue, until CNN reporter Anderson Cooper tenderly reached down and plucked a fry from a branch. Tasting it live on air, Cooper told the nation that the french fry "needs a bit of honey mustard, but it's not too bad," thus calming the situation by virtue of his trusted on-air persona and upper-class journalistic integrity. His momentary lapse in distress allowed some of the chefs, most of the children, the dog, and dozens of national guardsmen and journalists to escape the hallway and the hideous plant by sliding along the walls, squeezing out the front door, and streaming and screaming and howling almost in unison into the very air which contains sunlight "MY GOD IN HEAVEN WHAT IS THAT THING??"

Just then, arriving like Superwoman fighting destiny over dibs on a light plane crash, the botanist from University, Professor Elizabeth "Miss Liza" Bellbottom, politely fought her way though the escaping hordes to reach the hallway. Stepping born-and-bred lightly over the skittling feet of frantic onlookers backing-up to within a hare's breath of the wall, Bellbottom turned on her iTrout-200 iRecorder and walked right up to Zack Wheat, who was standing by his treasured vase looking all the world like a man who really needed an apology.

"Excuse me sir," wide-eyed Bellbottom questioned, intently peering at the plant from less than a heir's bread away, "if I may inquire, my God in heaven what is that thing? I mean, just look at it!" she said, personally and academically intriqued, her iTrout catching every word.

"Clumsy mailman must pay," entoned Wheat, "for the vase." 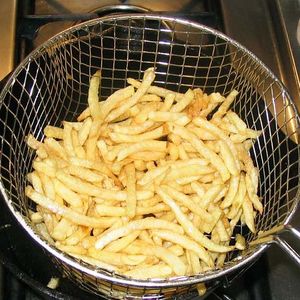 Bellbottom, Cooper, and Wheat prepare the fruit of the harvest. (AP wirephoto by Z. Wheat, all rights reserved)