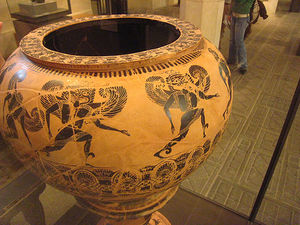 A decorative spittoon located in a museum in France. Usually such objects are accompanied by signs reading “ne pas toucher“, roughly translated as “for your convenience”.

A spittoon, alternatively referred to as a "spa'oon" in some cultures, is a concave-shaped mechanical device designed for the retainment of spit. Spit, which is generally spat towards a hole located in the apex of the concave-shaped concavity, is thereupon contained by it. The act of doing so is called “spittooning”. Though it is primarily used for spittooning, it may also be used for other uses. Spit spat into a spittoon is likewise referred to as “spittoon”, due to lack of a better word, and the resulting liquid waste that is dumped out of it is then referred to as “spittooned”, similar to the difference between the terms “meteoroid” and “meteoreoided”. This has become a major source of confusion for people who don‘t understand.

Zebras are an example.

Spitting, being among the most fundamental of human bodily functions, is purported to have existed since pre-evolutionary times and can still be observed in many mammals today. Zebras, for example. Along with the development of the spitting reflex, however, came the need to collect it. One of the earliest cultures to take advantage of advanced pottery-making technology were the ancient Egyptians, who were a notably advanced culture that also, interestingly enough, didn’t speak English. Their lack of an understandable language, however, was compensated by their notable technological advancements including, among others, the spittoon, the peanut, and the Q-tip.

Though similar vessels of all sorts have existed throughout history and been called many things, it was not until the Victorian age that the word “spittoon” came into common usage. The origin of the term is often pointed to British inventor Francis Schmitton, who, in 1846, became the first large-scale manufacturer of concave-shaped mechanical devices for the containment of liquid mouth-waste. These receptacles were cheaply made, easy to transport, and thus distributed widely across the British isles. As each one was stamped with the “Schmitton” logo, common people slowly began referring to them as “Schpittons”, "Lou Reed", then eventually the more modern term “Spittoon”.

Cleanliness is an important theme in Christianity.

Ceremonial spittoons (sometimes referred to as “stoups”, from the italian "stoupini") have been common fixtures in many catholic churches since the 1300s. They are often placed near the entrances of a church, this tradition originating from a time when serfs, after having worked in dusty fields all day, would be allowed to cleanse their mouths before entering for prayer. Though the vast majority of serfs were undoubtedly doomed to an eternity in hell due to irreparable poorness, the nobility often found it was their duty to turn them to the light of God regardless. Most catholics practice this even today, the more tourist-prone churches even opening up spittoon use to non-Christians alike.

In addition to this, large communal spittoons may appear nearer to the alters of many Christian institutions. Though ancient mysterious records show that these were originally used for baby-washing, nowadays these spittoons are most often used when taking communion. This is necessary because while wine is an integral part of the ceremony, drunkenness is considered sinful, which is ironic, however, understandable as irony is considered to be among the holiest forms of hypocrisy. Often, if no spittoon is available, a taker of communion may simply spit back into the cup they drank from. This practice, known as "communion-washing", was fairly commonplace until AIDS was invented.

Prominence in the United States

Like the jukebox, by the 1850s, spittoons became a common feature in saloons and brothels all across the southwestern United States. Cowboys and greasers of all walks of life would gather at these institutions where they would partake in such old-timey recreations as drinking, gambling, and lewd dancing. It was also during this time that rambling soda jerks began to find consistent work and milkshake-induced brain freeze became the culprit of many of the most entertaining shootouts in the history of the West. One thing that became an poignant issue, however, was the increasing habit of saloon-goers to spit directly onto the hardwood floors of these facilities causing great potential for slippage. Initially managers attempted to quell the danger by simply requesting that the patrons “not spit everywhere” but spitting was undoubtedly necessary for cowboys due to the high proportion of chewing tobacco and dirt in their diets at the time. After the invention of the mop proved not helpful at all, the Schmitton corporation decided to capitalize. Following a heavily-televised advertising campaign in 1852, American saloon owners tired of the hassle and strain of mopping up their floors adopted the imported technology with great enthusiasm.

Soon spittoons became an omnipresent feature of the industrialized United States and lead to many domestic imitators. Tiffany & Co. of New York was one of the first such companies. Instead of aiming to mass produce however, they chose to focus on quality rather than quantity. By the 1870s, Tiffany's high-quality hand-crafted designs became the preferable option for many of New York's urban wealthy and a majority of these items continue to sell for tens of thousands of dollars even today. One thing that experts like to point out on these pieces is the lack of noticeable wear-and-tear. Though Tiffany & Co. spittoons were used over and over throughout the decades, high quality materials allow them to appear almost as good as new. Borrowing from Chinese pottery traditions, in the 1890s porcelain was incorporated into many designs, not only providing for some beautifully-crafted spittoons, but also acting to provide a slicker, rust-proof surface. Additionally, the use of silver gilding proved effective as well as silver, when treated with the proper pagan rituals, is one of the least corrosive of decorative metals. 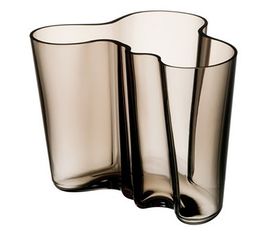 The 1969 Himmelb(l)au design. With this design, Himmelb(l)au wanted to capture the “fluid, ever-changing” nature of space, as well as space’s “fucking weirdness”.

Throughout the early half of the 20th century, the industry of decorative spittoons, spittoons that not only had real material value but aesthetic value as well, had been well established. By the 1950s however, growing trends in interior design ushered in new more conceptual designs that emphasized convenience as well as aesthetics. Plastic spittoons, designed with a narrow opening and handle for easy pouring, started appearing in the kitchens of many households across Western Europe and the United States. Small glass spittoons began appearing on coffee tables as well. These, often set out before visitors during special occasions, replaced the neat white handkerchiefs that many politer persons of the time carried with them.

By the late 60s, upscale European design firms the likes of IKEA and Himmelb(l)au entered the industry. Both became renowned for their boundary-pushing innovations, adding things like lids, filters, and robot voices that communicated when spittoons needed to be emptied. Pioneering in designs for the aeronautical industry, Himmelb(l)au became famous for their “pilot spittoons”, spittoons that could conveniently be used by fully-geared fighter pilots during long flights across the pacific ocean. In 1969, a spittoon designed by Himmelb(l)au became the first spittoon to appear in space when it was launched with NASA's Apollo 11 mission. Consequently, Apollo 11 became the first successful manned mission to the moon.

Despite these technological advancements, however, manufacturers saw the popularity of their products slowly start to wane as popular culture gravitated away from such concepts as “basic hygiene”. Fortunately, in 1972, Led Zepplin’s hit single entitled “Be My Love Spittoon” reinvigorated the spittoon industry and returned sales to a stable average. The song, which includes many statements about the positive aspects of spittooning, ranging from its usefulness to its aesthetic value, has since been widely covered by many popular musicians.

In the contemporary United States, it is fairly common to have at least several spittoons positioned in a motor vehicle. Spittoon neglect, however, combined with inebriation, is often cited as one of the most typical causes of motor accidents. According to the National Institute of Statistics, in 1985 98% of all crash fatalities occurred in vehicles where the spittoon was either being improperly used or obstructed in some way. Since then, the Department of Motor Vehicles has declared spittoon training courses to be mandatory.

In the context of earthquakes, not having a spittoon properly secured is another potential hazard. Experts advise placing spittoons high up on shelves or other high places with minimal support. Experts do not advise that, I mean. Don't do it. 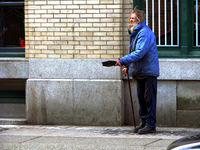 A local entrepreneur offers his plastic container to be spat in. This may come with a small fee which is to be handed to him directly.

During the holiday season, it is a common western tradition for unemployed middle-age members of the “Salivation Army” (a charitable Christian association) to dress up as Santa Claus and stand on busy street corners. These Salivation Army members then ring festive holiday bells and invite passerby to donate by spitting into their shiny red spittooons. The collected spittoon is then fermented for a period of thirty days, combined with dairy products, and used to make eggnog. Revenue generated from the selling of this eggnog is then donated to families in need

Spittoon-handling is another popular use of the spittoon. As most professional sanitation codes disallow the use of a spittoon in the workplace, areas with a high concentration of white-collar workers provide for high spittoon demand. People wishing to earn a few extra dollars can then choose to capitalize on this by offering passerby to spit in their various guitar cases or Styrofoam cups in exchange for either for a small fee or a few words of wisdom. 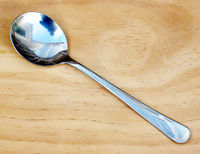 It is important to note that under certain circumstances the spittoon is referred to as a spa’oon in the cultures of Armenia, Argentina, Australia, Alberta, and Lichtenstein.

Though the difference is fairly subtle, “spa'oon” is generally used to denote a spittoon of feminine qualities whereas “spittoon” applies strictly to a male incarnation. Such differentiating features include smallness, straightness of handle, and viscosity. Viscosity is most easily tested by sliding the object in question down an inclined surface. Other defining qualities come much less objectively and have been subject to a large amount debate between linguistic authorities over the past century.

Recently, identities have become further muddled with the development of the much more modern "spoon" concept. It is a common mistake for Anglophones to confuse the two. One way for a foreigner unfamiliar with a local spa'oon-oriented language to judge the difference between the two is to rest the objects on a table and tilt said table to a 45 degree angle. A spoon will simply fall off as it has no viscosity.