SPRINGFIELD, Massachusetts -- For his grandmother’s 83rd birthday, Michael McPhee and his four siblings bought her a Dell laptop, a printer, and an internet connection. He and his siblings had hoped that she would learn how to send e-mails and keep in touch without racking up a $300 phone bill by calling each of them individually, three times a day. That birthday was back in 2006. Now 88, Grandma McPhee has finally managed to print a black and white document.

“We spent the first 7 months showing her how to turn it on,” Michael recalls, “She knew which button to push, but had no clue how long to hold it down, what to do afterwards, how long to wait while the desktop loaded… It was a nightmare.” 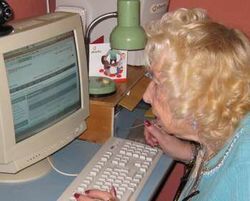 Grandma McPhee after the finger incident

Michael’s younger brother Mitchell was the one to come up with the solution.

“Electroshock. Wired the keyboard ‘til it was hot, set the program, let her at it.”

Being able to successfully boot up the computer was not the final step, however.

“She just stared at the screen for fifteen minutes or so,” younger sister Phillis said, “Finally her eyes adjusted, though, and she asked me what the icons were. I told her to open the internet, but she didn't know that's what the mouse is for. She jammed her finger into the screen and cracked it.”

After replacing the screen with an external monitor, Michaela walker her through the process of using the internet.

“I put her hand on the mouse and guided it through the steps. Turned it on. Put in the password. Let the desktop come up. Clicked on Firefox. But when the browser came up, she was so surprised she went into cardiac arrest.”

A nice save by a paramedic got her to the hospital, which led to 4 months of recovery time and suddenly it was 2009, when Mitchell got fired from his office job for detonating an M-80 in his coworker’s cubicle.

Back in action and with a Pacemaker, Grandma McPhee went at the Dell with a vengeance.

“To this day I don’t know where she got the baseball bat,” Michael stated, “Or that kind of a homerun swing.”

“Thank God she didn’t understand us when we described how the monitor was replaceable, and that the computer was actually the other, flatter thing on the desk,” Phil added. 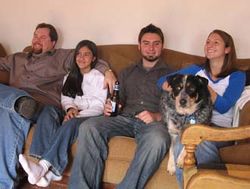 From left to right: Michael, Michaela, Mitchell, Phil and Phillis

After vacuuming the remains of the monitor and with Mitchell already in jail awaiting trial, Michael set a different goal; the printer.

“I figured we’d avoid the internet completely, for the time being. I showed her how to bring up Word, type a bit, turn on the printer, and hit the ‘print’ button. It was easy, but incorporated all the elements we’d been working on for years – moving the mouse, double clicking, identifying icons, and waiting for the results.”

Six months, one fire, and three keyboards later, Grandma McPhee was left on her own for a week while everyone else was vacationing – Michael in Bermuda, Phil in Maine, Phillis and Micah in New Zealand, and Mitchell in solitary. To their surprise, they all received letters from Grandma on the same day, all with the same message:

“There was a typed letter ‘H’ and then a handwritten note, saying ‘-ello, I hope you’re all doing well. I fell and broke something and can’t move much, so when you get back would you mind helping me up? I’m getting hungry.'"

“We couldn’t believe it,” Phillis said, “Grandma had finally made something work on the computer.”

“Finally, we could go about our lives without checking on her every day to make sure she was still alive,” Michael added with a chuckle.

Mitchell, out on parole, summed up the event nicely.

“It’s great. Finally she can let us know in a non-intrusive way if she needs anything, and if she does we’ll be right there.”