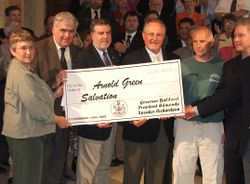 According to a prominent spokesperson for the Jehovah's Witnesses, spot number 144,000 in heaven has been taken by Arnold Green of Burlington, Vermont.

"We were very happy that we finally met our quota," said spokesperson Jim Williams, who plans to find his own way to heaven through some other religion.

The goal was finally reached after years of door-to-door soliciting, amassing over 6,000,000 members. Said Williams, "now all we have to worry about is the second coming, which is probably going to happen April 14, 2007. But who are we to guess?"

"Boy oh boy was this a great surprise!" said Green, a recent convert and avid fisherman with an inexplicable southern drawl, "I was just settin' there on me bum when suddenly the doorbell rangs, and these folks with this big ol' check are at me front door! I thought it was Ed McMahon and a million dollars, but this is pretty good, too!"

However, many wonder what will happen to the others who were hoping to get into the Big Party.

"One problem that obviously arises is the overflow," said Williams, "and with over five and a half million on the outside that sure is a lot."

To temporarily solve the problem, Williams said that Headquarters has sent out the following form letter:

The last spot in heaven has been taken. However, conflicts, cancellations, and blood transfusions could still occur, so don't lose hope. You are officially on the Jehovah Waitlist! 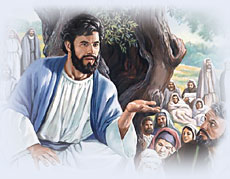 Some Witnesses were disappointed.

"I have always been a good and faithful person, never harming a soul, and what do I get?" said Wisconsin resident Norma Butler. "I get an envelope marked 'You may already be saved!' with this nonsense in it."

Williams said not to worry. "Hey, I was waitlisted trying to get into Princeton back in my day! Did I give up? No! I never gave up hope!" said Williams who graduated from LaSalle Extension School with a degree in penmanship.

Those faithful on the waiting list are being compensated with a free six-month subscription to The Watchtower.