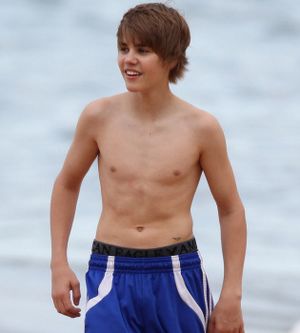 Justin Bieber being too sexy for his shirt.

Los Angeles, California – According to TMZ and some blog about Justin Bieber's mouth, teen pop demigod Justin Bieber ate a sandwich yesterday afternoon. UnNews contacted Bieber for an interview about the sandwich shortly after the news broke, but his agents declined to speak with us. Fortunately, a rummage though his garbage can by an unnamed investigative journalist reveals that it was a ham and cheese on wheat with mayonnaise – Bieber's third favorite type of sandwich.

Uninterestingly, Disney Channel teenybopper Selena Gomez, Bieber's girlfriend, does not like mayonnaise on her sandwiches. Many speculate about what effect their conflicting opinions on the flavor of mayonnaise will have on their relationship. In fact, tabloid magazine Private Invasion did a recent piece, titled "Bieber: 'It's Mayo Way or the Highway'", which points out that their mayonnaise preferences have been a source of conflict since they began dating. Despite this, many are hopeful that she and the Beeb will be able to overcome a very divisive issue that has ended so many celebrity couples.

This news has also had significant economic effects. Since the news broke, sales of ham, cheese, wheat bread, and mayonnaise have increased by an amazing 20% among prepubescent girls.