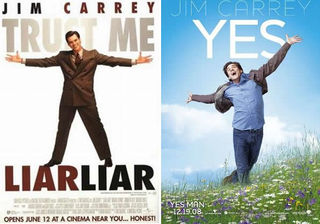 As do many second releases of films, Yes Man features a different promotional poster, reminiscent of the original.

HOLLYWOOD, California -- Veteran screen actor Jim Carrey and up-and-coming director Peyton Reed have teamed up for the upcoming 10th Anniversary release of Liar Liar, and have chosen particularly unconventional means for its production.

While recent special edition releases in the movie industry have generally contained the original content of their respective films, often remastered, and often with extras including games, commentary, and deleted scenes, Liar Liar's anniversary is going to be celebrated in a very special way. In lieu of the typical DVD, Blu-Ray, or even VHS format, no physical copies of this edition are to be sold in any form on its release date. It is to be released exclusively to theatres nationwide on December 19th, 2008, featuring entirely fresh footage, re-filmed just this year, as well as a slightly modified plot and premise. In addition, Jim Carrey is the only original actor that will be returning in this release of the film, and no characters from the original script seem to have made this one's cut. Citing these slight modifications, Warner Bros. have decided to give the film a fresh new name, Yes Man, to go along with its fresh new look. It also seems that Warner was unable to obtain the rights to the name Liar Liar from Universal Pictures, the film's original distributor.

In this rendition of the plot, Fletcher Reede (whose character's name has been changed to Carl Allen) must say "yes" to every question he is asked for an entire year, as opposed to the more mild version, in which Fletcher was incapable of lying for an entire day. The family Fletcher originally had has been replaced in favor of the fact that Carl has absolutely nothing and nobody he cares about in life, and has almost come to grips with that fact entirely. Like Liar Liar, it is typically expected that as a result of Carl's inability to say "no", hilarious misunderstandings and circumstances are to follow. Or as they say in the marketing business, "Hilarity ensues".

The re-release has drawn a small amount of criticism from Liar Liar fans, who assert that it has been eleven years and nine months since the film's original release, and not ten years. When asked to comment on the supposed tardiness of this edition, Carrey himself stated, "It's all bullshit, really. I mean, they're mad at us because it's a year and nine months late to be the 10th anniversary edition. But, how do they know it's not 3 years and 3 months early to be the Fifteenth anniversary edition? Huh? Am I right?" In fact, for all anybody can tell, that could very much be the case. The official release's complete title is indeed Yes Man, and mention of the anniversary being celebrated is nonexistent in this incarnation.

Fans of Carrey's erratic comedic stylings, as well as Liar Liar itself, are sure to flock from around the world to movie theatres in anticipation of the re-release, projecting Yes Man to possibly become the single most commercially successful special edition version of any film in history. When asked about this monumental statistic, director Peyton Reed promptly responded "Dude, um...it's a totally different movie...didn't you notice that?" We anticipate Reed to have been on copious amounts of intoxicants during the time this statement was made, and are much quicker to cite the fact that the entirely sober Jim Carrey seemed to be fully aware of the movie's re-release, when asked to comment earlier.