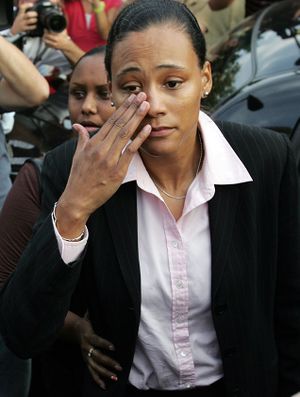 A distraught IOC dope-team member who has been unable to eject a single contestant this year.

BEIJING, China - The summer olympics is a time that only comes around every 4 years. Everyone flocks to the host city to see the magnificent athletes try for the gold and bring glory to their country. However, it is not just the attendees that enjoy the olympics so. It is also the members of the IOC that get to run the dope tests.

The olympics bring about thousands of wonderful athletes, at least 20% of whom are taking performance-enhancing drugs, and it is the job of those members of the IOC to find them, and embarrass the hell out of them, however this year they have run into quite a snag.

This event only happens once every four years, and everyone knows that the Winter Olympics aren't quite as good for this as good for spotting dope-heads, but it looks like the Summer Olympics will draw to an end without any major evictions, and the IOC dope team will just have to make due in 2010 with the Winter Olympics if they are even still interested in evicting dope-heads by then. Many dope-team members have given up on Beijing and have returned home to their respective countries to nurse the mental wounds that have erupted from the lack of work to do during the Olympics, many claim that they will not be returning to the Winter Olympics, or the Summer Olympics in 2012, what a shame that would truly be.