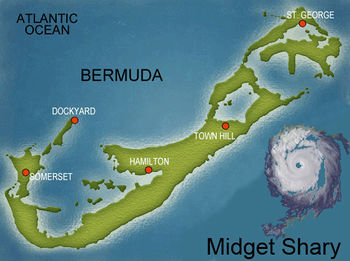 HAMILTON, Bermuda -- The government of Bermuda urged islanders to secure their boats as tropical storm Shary strengthened to become a hurricane Saturday, although authorities said the storm was missing the tiny British Atlantic territory.

But Bermuda locals and tourists alike just couldn't stop laughing long enough to do anything, as Shary became a mere Category One hurricane. Instead, the storm was deemed a “laughing stock.”

Islanders discounted the tropical storm warning for Bermuda late Friday night and said Shary, like a typical dimwit, was moving well to the east of the island. The tiny hurricane had maximum sustained winds of 25 mph, according to the U.S. National Hurricane Center in Miami, but was otherwise called a completely misguided wimp.

The slightly darkening skies did not dampen the spirits of tourists like Bill and Margaret Beanski, an unmarried couple from Warsaw, who wore Bermuda shorts as they strolled through Hamilton. Mainly because both of them realized it was dusk.

Derrick Binns, the permanent secretary of the Home Affairs Ministry, called on islanders to refrain from laughing at the storm for fear of natural reprisals: “We should be thanking our lucky stars, not laughing. Otherwise the ‘triangle demon’ might get enraged and devour us whole."

Shary is the 19th named storm of the current Atlantic hurricane season. Then again, Pluto used to be classified a real planet, but is now termed a mere “pussy" of a celestial body.