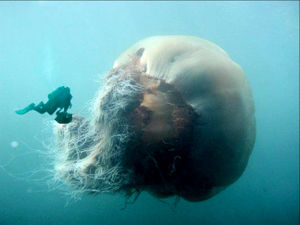 TEAHUPO’O, Tahiti – A large number of humongous jellyfish were sighted in the sea near Teahupo’o Beach, Tahiti, according to Prof. Mulu Ari of Brando Marine Exaggeration Institute. “This anomaly is surely caused by radioactivity.” - Ari told the media.

“We speculate that these giant sea monsters grow in the radioactive waters off of the Bikini Atoll, and they’re brought to Tahiti by the ocean currents. But they always seem to choose Teahupo’o because there are surfers.” Ari mused.

“The giant jellyfish is a predator – that means that it locates, stalks, pursues, catches, befriends, then tricks, strangles, kills and consumes its prey." “What does it like to eat?” AFP asked the Professor – “surfers!" – replied Ari, “They are especially fond of surfers!”

“Unless one surfs the deadly reef-break at Teahupo’o then there is little likelihood of their coming face to face with these hideous beasts. But anyone foolish enough to want to see the Giant Jellyfish, can fly to Tahiti.” – advised Ari.

“If one is unsure how to find Teahupo’o once they arrive in Tahiti then they need only ask any of the local people.” Ari continued. “Make a sign with your hand like cutting your own throat and say, 'onde posso me matar?' - then every local will point the way to Teahupo’o.”

This article features first-hand journalism by an UnNews correspondent.
Retrieved from "http://en.uncyclopedia.co/w/index.php?title=UnNews:Giant_mutant_jellyfish_sighted_off_Tahiti&oldid=5938753"
Categories: