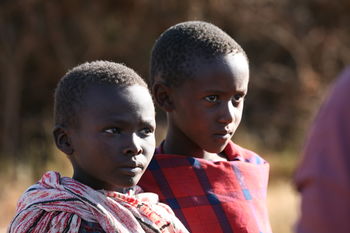 Two Darfuri Children rejoicing upon hearing of the genocide's end.

DARFUR, Sudan – According to several reports, the six year genocide in Darfur ended this morning at 10:23am EST.

In an emergency address to the United Nations Slava Kiir, Southern Sudan's army Commander, stated, “Yesterday night, President al Bashir saw some college students on the news raising awareness of the genocide in Darfur by selling t-shirts and wristbands. They were also protesting the genocide by not attending their lectures. It wasn’t hard to see that these students were really serious about their commitment to spreading the word of the genocide. Naturally, al Bashir realized how ridiculous the genocide really was and decided to end it.”

President al-Bashir ordered a cease fire in all of Sudan, ending the Darfur genocide after years of murders and village burnings. This is good news for the many refugees who have been displaced since the genocide broke out in 2003. Others weren’t so glad that the genocide was ending.

Rick Lewis, a concerned factory owner in China, said, “Our investors aren’t happy about this at all. Al Bashir can’t do this now, in these harsh economic times. Didn’t he think about the already high unemployment rate in China? This will destroy the t-shirt and wristband industry. Where are all these children going to be working now? The coal mines?”

“I’m guessing we’ll find another genocide or something. I’m pretty sure there’s some more of them out there.” replied Jim Cooke, a representative for the Save Darfur Coalition, who wished to not be identified by name or quoted directly.

In response to the cease fire the US moved quickly to announce that it would issue an arrest warrant for the Sudanese president on charges of war crimes, violations of human rights and a single count of genocide. “We have to bring justice and democracy to Sudan. And the only way to do it is to send an invasion force,” remarked General David Petraeus, of the United States Army. The invasion of Sudan will be handled by the same military officials who led the recent string of highly successful military ventures in the last couple years. Gen Petraeus continued, “Even though former Secretary of State Colin Powell acknowledged the genocide in Darfur back in 2004, we waited a couple years to see if it would sort itself out. But now that there’s a cease fire, it's the perfect time to go in and arrest al-Bashir without any problems. How much trouble can one man be?”

Unnews Update: In the time since the article was published, several Chinese factories have announced that they will be switching to production of “End Child Labor” t-shirts and wristbands, which will prevent any toddlers from losing their jobs. “We here at the End Child Labor Coalition think it’s important to raise awareness of child labor by purchasing a t-shirt or wristband from our easy to use online store. These items will become available for purchase in the coming weeks,” said Jim Cooke, a representative of the newly established End Child Labor Coalition.

Featured Article  (read another featured article)
Featured version: 22 February 2010
This article has been featured on the front page. — You can nominate your favourite articles at Uncyclopedia:VFH.