UnNews:Flynn pleads guilty to lying to FBI, cooperating with Mueller 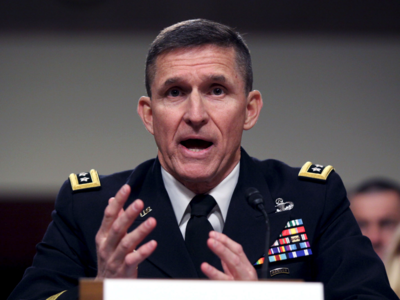 WASHINGTON -- Former Trump National Security Advisor and retired General Michael Flynn, in a not-too-surprising move we all saw coming eventually, pleaded guilty Friday to lying to the FBI in connection to Russiagate. Flynn had been under scrutiny for his Russian and other foreign government contacts during the presidential transition. He had been working as an unregistered foreign agent to Turkey. (The country, not the animal or the delicious Thanksgiving feast.)

Pulling a John Dean on us, and too late to be pardoned, Flynn is now cooperating with special counsel Robert Mueller in an investigation that has already resulted in the indictments of Paul Manafort, Rick Gates, and George Papadopoulos.

If you (like me) weren't alive when Watergate happened (and you, unlike me, aren't too history savvy), you might be saying to yourself "Who the hell is John Dean? Wasn't he that punkass actor who died in a fucking car crash 5 billion years ago?" You couldn't be more off. That was James Dean, he was not a punkass (he was a "teen" rebel, thank you very much) and 1955 was not 5 billion years ago (it was 62). John, not James, Dean was a White House Counsel to Richard Nixon during the scandal that arose from a "third rate burglary" at DNC headquarters at the Watergate building, across the street from the Watergate Hotel in Washington, D.C.

It has also been revealed that senior advisor (and Trump's son-in-law, which makes his job alarming) Jared Kushner, directed Flynn to contact Russia, this being after Obama had issued sanctions against Vladimir Putin's country due to their meddling in the election.

Flynn could have gotten in even worse trouble than eventually transpired, but he entered a plea deal in which he would accept a lesser charge (lying to the FBI, still more serious than a traffic violation or jaywalking) if he agreed to "flip" on Trump and cooperate with Mueller. This is how to bring down a kingpin: Catch the little fishies until the only one left is Moby Dick. And catch Moby Dick before he eats you for dinner and poops you out.

We at ultra-liberal UnNews continue to cheer Mueller on and hope he can take down Trump before he becomes dinner and poop.