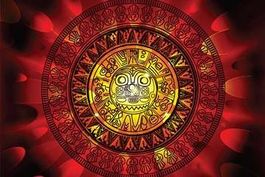 MEXICO, Nibiru's pathway -- Due to the hype surrounding the resetting of the Mesoamerican Long Count calendar on December 21, 2012, the state of Mexico is currently experiencing a spike in tourism. A lot of New Agers seem to want to commemorate the, for lack of a better word, event at the ancient Mayan pyramids. Or some stupid crap like that.

To capitalize on this phenomenon, the official Mexican tourist agency, Visit Mexico, released a theme song for Christmas on their website titled "Feliz Navidad 2012". As a special treat, "FN12" is sung by the writer of the original 1970 version, José Feliciano. Feliciano, however, is actually a native of Puerto Rico, but as he is blind, the people behind Visit Mexico tricked him into recording it by telling him it was for Now That's What I Call A Latino Christmas!

When asked if he thought deceiving a blind man for money and tourism would earn them all a reasonably cheap ticket to Hell, one of the agents behind the project said, "No podría ser peor que aquí," which translated is, "It couldn't be worse than here."

The lyrics to the damnable song are as followed:

What is unique about this new edition of "Feliz Navidad" is that the above sequence of verses is repeated 20 times, stretching the song past 20 minutes and making it even more an exercise in redundancy than the original. Visit Mexico states in the description on the website that this is to make the song complement the Mayan calendar. The lyrical loop represents the 20 katun cycles, and the great length represents the 5,125 year reign of the current calendar. Thus, the song literally feels like it will go on until Doomsday.