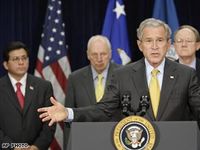 If you think these guys are on point,you are a total idiot

WASHINGTON, USA --- Last night, the house gave the final thumbs-up to the Foreign Intelligence Surveillance Act by a vote of 227-183. This bill expands the service area of the PATRIOT-act, which can now operate in foreign countries, without the need of a warrant.

This is a disaster to the US bill of rights. I mean, any idiot can see that this bill will only be used as a decoy for political gain. Seriously, if you think that this bill is fantastic, you have got to have the biggest case of paranoia there ever was. I mean, I for one already know feel totally safe that all critics will be hurt by this, if not worse.

Oh my God, what was that?

HELLO?! IS THERE ANYBODY DOWN THERE?!

HELP! To anyone who can read this, HELP!