FEDERAL BUREAU OF INVESTIGATION, Langley, Virginia, United States - The United States' primary domestic intelligence agency, the FBI, said today that it has acquired "shocking new intelligence" regarding their claim to fame, the controversial War on Terror. Prior to this announcement, their primary role in the country's president's war on guerrilla insurgencies in the conflict-ridden Middle East was to track down and eradicate Al Qaeda's "big cheese" Osama bin Laden.

However, according to recently processed intelligence, FBI Director Robert S. Mueller III said that "...[it] appears as if we have gotten this whole thing wrong. As it stands now, Al Qaeda has been completely absolved of all of our previous accusations. We have discovered the true mastermind of the 9/11 attacks on New York City." 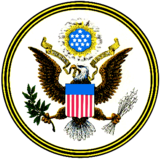 The US Seal, which signifies an effort to strive to absolute truth.

Their new most wanted man is one Michel de Nostredame, better known by his Latinized name Nostradamus, who they say "publicly announced" the attacks before they occurred. Said Mueller, "We at the FBI have just received word of the text Les Propheties, in which de Nostredame describes in detail the attacks which, as we all know, later occurred."

This news has come as, to put it lightly, a shock to the American people. Previously thought to be the brainchild of Islamic extremists, the news of terrorists' apparent non-involvement in the attacks seems hard to accept. "What the hell was Osama bin Laden doing sending all those videos, then? What about those dust clouds which claimed "Al Qaeda did this" in the skies after the event?" queries Fred Robinson of Manhattan, New York.

In response, the FBI has released a statement saying "Sorry, Al Qaeda" along with a basket of flowers and a subscription to the Fruit of the Month Club to the group.