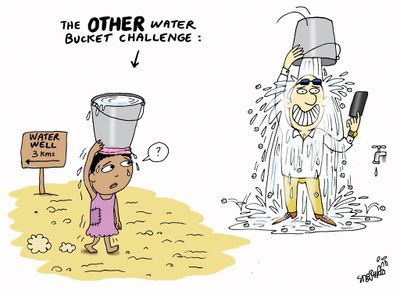 Experts say it is extremely unlikely that people who post these kinds of sanctimonious images then do fuck all to help charities themselves.
Some of the classiest challenges have come from the UK.

Everyone online who complains about the ice bucket challenge immediately logs on to an ALS charity site and donates lots of money, experts have claimed.

The craze, which has taken over the internet in the last month, has been widely criticised online for being frivolous. Some have even called it thoughtless, given that water is scarce in many parts of the world, and the ice water thrown away in the challenge could have been used to water African crops. Because that's how international water supplies work.

While these critics have been just as widely attacked for being killjoys, motor neurone disease charities around the world have raised over $100m in the last month, which experts believe must have come from these apparent misanthropes.

"If everyone participating in and watching the ice bucket challenge is a feckless moron," explains statistics expert Joanna Corey, "This huge, unprecedented windfall must have come from people expressing distaste for the challenge.

"It doesn't make sense that someone would criticise the challenge for helping nobody, and then simply not give money to charity.

"That would just make them seem like massive pricks."