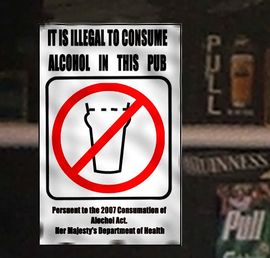 London, ENGLAND - England and its people are preparing themselves for the upcoming public drinking ban which becomes law on July 1st, a date very early in July. From this date it will be illegal and against the law to consume alcohol within any public building. Scenes of desperate patrons huddled in pub doorways, quickly sipping their dirty alcoholic beverages, are set to become common-place as they have done in Scotland and several other countries around the globe as well as all around the world.

English publicans are pointing with their strangely chubby and largely yellow fingers to Scotland, where revenues have fallen considerably since their ban came in, as an indicator of future non-hangover headaches. George Duster, landlord of the Penetrated Pig in Great Yarmouth commented, "Getting people drunk is by far and away the most effective way to get them to buy alcohol. I know the government say we should diversify, but just how many Pork Scratchings can one person eat in an evening?" (According to industry figures it could be as low as 13.5 pieces of pig fat.)

The suggestion that most people visit pubs and bars simply to consume alcohol, is a charge that Health Minister Patricia Hewitt refutes. "It's certainly an old-fashioned position to suggest that people go to theses places simply to drink alcohol. In fact I believe most people welcome our open-legged stance on public drinking. I think many spouses will appreciate their other-halves returning from a night out with their clothes not covered in their own vomit, I know my husband will."

Hewitt also believes it will have a positive effect on the health of staff working in bars and clubs. "I've always thought it unfair that bar-staff should have to accept the effects of second-hand drinking. But what we're most definitely not saying, is that people can't drink alcohol in the privacy of their own house, or whilst out driving in their own car." 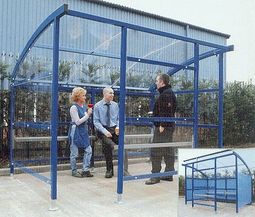 Drinking-breaks at offices and factories will now all have to take place outside in purpose built shelters.

When pressed as to what exactly second-hand drinking was, Hewitt reportedly ran away screaming that everyone's out to get her.

The ban comes on top of a recent study titled "Do you have to drink to enjoy yourself" by Cambridge University. The study found conclusively that you did. "People who don't drink generally are more miserable and unstable and definitely less willing to have sex with me" the report concluded.

In the state of Los Angeles in the US, a public drinking ban has been in affect for three years. Most think it has had positive effect. State Governor The Terminator commented, "I was sent back by John O'Connor in 2029 to terminate Public Drinking in Los Angeles. See you at the party Victor. I'll be back! I'll be back!"