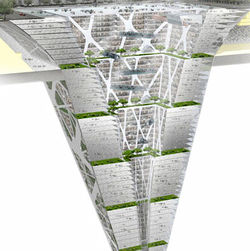 DENVER, Colorado -- Wikileaks secretly released highly classified documents acquired from an anonymous spokesperson named Carlos Mendes of the Mexican architecture group BNKR arquitectónico, describing the existence of huge “earthscrapers.” The reason for these is obvious: they are each a monstrous, regimented, 100-story inverted skyscraper that will serve as self-sufficient bunker cities underground.

Designed and built to withstand limited nuclear exchanges as well as floods, social chaos and childish Uncyclopedia scat-humor, these earthscrapers will not spoil the desolate, radioactive skyline by being concealed entirely underground and designed in such a way that they incorporate each member country’s historical culture in their design.

The concept was introduced after a famed astro-atheist confirmed that because the force of gravity naturally forces material things downward therefore it's idiotic to build things upward as the foolish Egyptians had done when building the pyramids; it was, therefore concluded that a more sensible method was to follow the laws of gravity and build things downward.

These immense earth-scrapers are powered entirely by the Tesla method of applied perpetual-motion technology which was first successfully used to make John McCain, P.O.W., eternal, much to the consternation of all peace-loving earthlings in the KGB (whatever the heck that stands for).

The top 10 floors — which, here, would be the “bottom” ten — will act as military command centers as well as centers with mechanisms for political, immigration, and prison administration. The next 10 floors contain a museum and cultural center surrounded by centers of education including subterranean universities and corresponding jobless welfare centers. Below that you've got 10 floors of retail space (including a gay red-light district), then 10 floors with medical and graves registration facilities. The next 50 stories will contain apartments and finally, deep underground, synthetic food production and apparatus that will recycle oxygen and water for the entire structure. It all terminates some 1000 feet below the surface with huge underground Soylent-green producing sewage recycling tanks located as cavities at the inverted apex.

The center of the interior of the structure is actually hollowed out, and there are bridges that extend out into the center so that distraught denizens can jump off to commit suicide if they so desire... and believe us when we predict that many survivors will choose suicide rather than living like fecal-eating rodents underground. 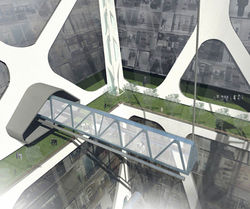 According to information that Wikileaks agents tortured out of insider Jesse Ventura there are several hundred of these underground cities in over 30 countries around the globe, with the largest hidden beneath the Denver Airport in Colorado. The second, third and forth largest earth-scrapers are located in Great Britain, Germany and Sweden respectively.

Most countries secretly ruled by the global elite, who control central bank counterfeiting and the military-industrial oligarchy, have at least one each of these earth-scrapers already constructed. Only Poland has opted to build their earth-scraper upside down, as a skyscraper, claiming that it is easier to build above ground because digging upward and displacing air is much easier than dirt.

Poland has also reasoned that there is no possibility of air-quakes where as earthquakes could seriously damage any of the inverted ones. This was confirmed by the University of Warsaw in a news brief explaining that the law of Polish gravity was opposite of that effecting other nations

Egypt has also built miniature upside down stone pyramids to act as the underground wonders of the world. Meanwhile it is planned that all dogmatic religions, apart from the Skull & Bones Order of Moloch, will be banned.

Wikileaks claims that loose-lipped Ventura also spilled the beans on WWIII after being threatened with 5 seconds of water-boarding. According to Ventura the plan is already in action which will lead to a limited nuclear exchange in the Middle East, beginning with an Israeli attack on Iran and followed by the deployment of tactical nuclear weapons already secretly given to Iran by China.

After the initial horrific exchange a cease-fire will be called and all countries around the world will face enormous civil unrest and the subsequent planned imposition of pre-planned martial law. And all of this chaos being the first move in a global power struggle that will lead to China and Russia “catching a cold” caused by the intentional release of racist-pig biological viruses engineered to exterminate the Chinese and Soviet races.

The end result being that only Poland will survive to dominate the ravaged surface of the globe while the elite and their cronies will wait out the cool-down period in these huge subterranean earth-scrapers. Once the surface is again habitable the elite will emerge to offer the solution of one world government, one world bank, and global slavery under the merciful gaze of their kind deity Moloch, the wise old owl.