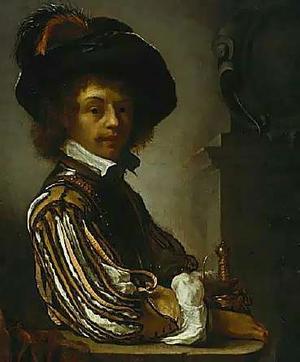 The stolen painting. Observe the clever way the artist died a long time ago, thereby increasing the painting's value. Today's artists could learn from that.

Sydney, Australia - The painting A Cavalier (Self Portrait), by the Dutch master Frans van Mieris was stolen from the Art Gallery of New South Wales in Sydney on Sunday night.

'As yet, we have yet to locate any clues that might assist us in the apprehension of the miscreant responsible,' said Detective Inspector Plod of the NSW Police's Burglary squad.

The only items found at the scene of the crime were a monocle, a butt thought to have fallen from a cigarette holder, some footprints from a pair of size 6 wing-tip shoes and a carved wooden penguin painted with the phrase "catch me if you can, waak, waak, waak.

'We believe that these items were dropped by a law-abiding citizen who visited the gallery on Sunday. Possibly, this is the same person who left a curiously heavy umbrella behind at the Museum coat check,' said Plod.

Gallery director and irritating martinet Edmund Capon appealed for assistance. 'The painting was worth nearly a million and a half Australian pesos,' he said, 'In dollar terms, this is biggest theft the gallery has faced since that van Gogh was replaced by a green box covered with question marks.

'I should get around to opening that one of these days.'

Gallery authorities said that the investigation not cause significant disturbance, and the gallery will remain open to the public.

'After all,' said Capon, 'We wouldn't want anything to get in the way of our upcoming exhibits, such as "Bejeweled Cat Sculptures of Ancient Egypt", and "Golden Clown Masks Through the Ages".'