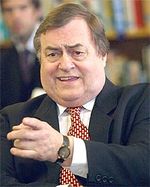 John Prescott refutes the allegations in the House Of Commons. Quoted to say "This is bloody nonsense" after punching a lead member of the waterboard.

SURREY, United Kingdom -- Sutton and East Surrey Water company have issued a drought order, the first in the UK for three months. It has been alleged the water shortage was caused by John Prescott diving into the Thames to 'cool off in the hot weather' during a House Of Commons recess. However, reports have confirmed that this is nonsense: Prescott failed to attain his 50m swimming certificate, has acute hydrophobia and on the day concerned was looking at getting a new monocle to wear for the occasions when playing croquet.

The order prohibits the use of water for unnecessary use, meaning people are required to take showers rather than baths and utilise minimal amounts when washing cars to save on water supplies and drinking it is only permitted for those who say nice things about the water companies. However water-pistol fights are still allowed.

The drought has seriously affected all areas of Southern UK, with great numbers of citizens becoming hostile at the fact they are unable to drink their afternoon tea. However, northern areas of the United Kingdom have no such problem and remain covered in cloud, with rain forecast for the forthcoming week. A Yorkshire spokesperson commented:

"We would send the water contained in our reservoirs down south, but we can't be bothered. And anyway, those southern nonces don't know the meaning of the word 'drought'. In my day, during a drought we went without water for up to six days and never thought to complain."

Homeowners are urged to purchase lager rather than drink tap water until further notice.