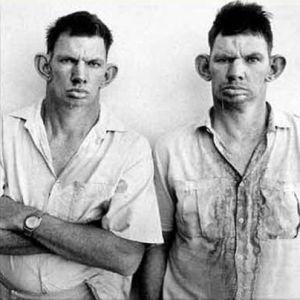 The Mayor of Norwich and his Wife.

NORWICH, England -- Denmark is to go ahead with its plans to eradicate Norwich in the coming weeks.

Up to 12 people have signed a petition requesting that the Danish Government go back on their plans to cull the whole of Norwich.

The Danish government released a statement earlier today saying that the cull must take place to comply with its duty to avoid in-breeding. British Prime Minister David Cameron stated that, while his party are against the cull, there is nothing Britain can do as Denmark have full ownership of Norwich.

Norwich was created in 1952 by the Danish as a breeding programme with the intention of making a sub species that could perform monotonous everyday tasks. However, it became rife with inbreeding after an attempt to speed the process which has left us with the toothless, web-fingered freaks that today are commonly associated with the city.

The residents are to be lined up and shot using a bolt gun, instead of the superficially more attractive use of a nuclear device, as this would contaminate the meat.

The event, along with post-mortem examinations, is to be broadcast live on Channel 5.

A spokesperson from the Danish government said, "I'm actually proud because I think we have given children a huge understanding of the anatomy of a Norwichian that they wouldn't have had from looking at a photo. It also teaches children the consequences of sleeping with their cousins."

Denmark have received offers from Israel and Palestine to rehome the Norwichians in their own countries. President Shimon Peres said in a recent press conference "Send them here! We have plenty of room. I can't foresee any possible problem with them being here." In response, Palestine fired several RPG's towards Israel, injuring a Cat. Israel have proportionately responded by murdering 8000 Palestinian children. In an attempt to avoid getting involved Danish officials have said "No seriously, fuck Norwich."

The programme's scientific director told reporters he had received death threats but would not alter his style of management because most of the threats had been “incoherent Norwich babble”. He added “Please, Norwich was a mistake. Let us end it.”