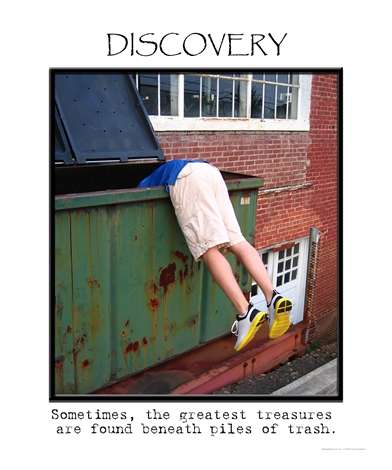 This little boy made a shocking discovery while looking for his younger brother.

Cinco de Mayo; Montana: Outside off a local Montanian cafe, several dead babies where found. Forensic scientist determined that the babies had been beaten, stuck in Blenders, or other strange deaths. One witness states: " I had noticed the meat at the local cafe stopped tasting like cow pie. " The owners stated: " no comment. " Montanian leaders have stated that it is hard to " keep [the citizens under control of a third-world country under control]. "

FBI agents had been searching for the baby corpses mentioned in all of the dead baby jokes. This last discovery may lead to the source. Other discoveries have been found in Iraq, Hell, and Sesame Street(All suburbs of satanville). The FBI has not released any papers on the incidences and does not plan to. They suggest people to quit using dead baby jokes to make friends, other wise their Babies may end up in dumpsters.

Other police on the scene say this may have to do with the recent news that babies are evil. The babies found seemed to have evil in them. Unfortunately no more results or conclusions can be made until lab results have been put out to the press.

Recent news says that the lab results will not be released.