From Uncyclopedia, the content-free encyclopedia
(Redirected from Cinco de Mayo)
Jump to navigation Jump to search 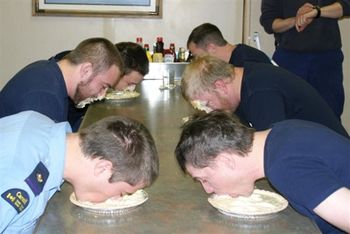 For those without comedic tastes, the so-called experts at Wikipedia have an article about Cinco de Mayonnaise.

El Cinco de Mayo is a national holiday in Mexico. It celebrates the prostitution of Mexican women board game players against France in a long, drawn-out game of Risk™.

Cinco de Mayo has become a well-known Mexican festival where participants consume 5 jars of mayonnaise. It is generally celebrated on the sacred holiday of "El Día Para Limpiar El Refrigerador", whose date and frequency varies widely from region to region, and indeed, from household to household. 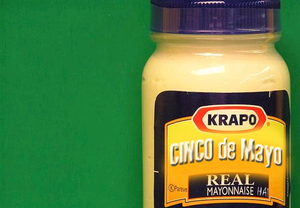 The cause of the conflict.

Beginning in April, 1862, as an argument over whether or not it was better to use mayonnaise or Miracle Whip™ in an egg salad sandwich, it soon escalated into a full-scale food fight that resulted in the death of 40,000,000 people within the first few hours.

Diplomatic efforts by the slut of Mexico, Cinco, and the whore of France, Black Jacque Chirac, resulted in a temporary cease-fire and the beginnings of peace talks. These efforts did not go well, and almost resulted in the continuation of the food fight.

Cooler heads prevailed, and it was determined that the most fair way to resolve the dispute was a game of Risk™. The game itself took over 11 days to complete, with repeated accusations by the French that the dice were loaded.

On days 1-3, the game looked like an even match. Mexico had moved it's forces to ukraine and already taken over much of Europe, while the French had settled in Austrailia and had began building up their forces. On day 6, things were completely different. Mexico had lost Europe after the french sent in a wave from Austrailia. Mexico had to retreat to Africa and parts of North America. There they held the defense and began troop build up again until day 11 when they cleared the whole board by using mass cavalry assaults of Butlers of the Ortegan lineage. The French spat in the Mexicans bagettes and then admitted defeat, but not before dropping excrement on them from their tall towers. The French dressed up like peacocks and were forced to do a mexican salsa dance on top of the board game.

Mexico prevailed on May 5th, and the French were forced to acknowledge (in writing) the superiority of mayonnaise.

During the Franco-Mexican War, the Mexican army met the French at the Battle of Tijuana. Vastly outnumbered and outgunned, the Mexicans, led by General Ignacio Zaragoza Seguín, managed to knock the socks off the French army, delivering their first defeat in over 50 years. After the smoke cleared, the only units left among the French were 5 jars of mayonnaise. General Seguín picked up the jars and gave them to his first lieutenant and said, "este es desagradable." The lieutenant understood this to mean, "Eat this, and digest it," which was pretty reasonable for someone who was only on lesson 2 of his Rosetta Stone CD-ROM. He opened each jar, one by one, and forced the gooey mix down his throat without vomiting. The General was so impressed by the lieutenant's intestinal fortitude that he shouted, "¿Qué haces, idiota?" It was this affirmation of the lieutenant's deed that set in stone the importance of Cinco de Mayo for centuries to come.

Although Mexican beer is not consumed during Cinco de Mayo, it is heavily advertised on American television during that time.