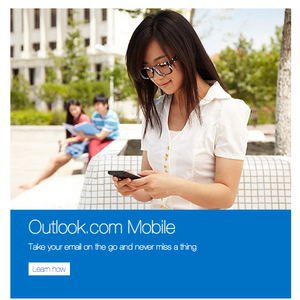 Butter wouldn't melt. Oh but it would.

UnNews has been contacted by a young man from Connecticut who claims the fresh-faced Asian girl who advertizes Outlook.com Mobile on Hotmail's email page is actually a bitch who cheated on him.

"I can totally see why they went for her," said the 23-year-old, who asked to be identified solely as Ken. "She has really got that cutesy Asian look down. I used to fucking love that shit, boy. The oversized glasses, the nerdy expressions. Now every time I see a Hello Kitty bag, it's like a knife is twisting in my heart."

"My friends were all teasing me, saying I had Yellow Fever, but I knew it was love. I grew up in a very multicultural environment, I didn't find Asian chicks particularly exotic or mysterious. But Mae Ling, she just rocked my world, she was beautiful, sophisticated, talented."

Yet it all went wrong during Spring break, some six months after the pair had started "going steady", to use the parlance of today's youngsters. Ken had planned to spend the break with Ling in their dorms in Connecticut, but at the last moment Ling backed out, claiming her father was ill.

"If I'm honest, I knew something was wrong, but I didn't question her," admits Ken. Just two weeks later, a friend tagged Ken in a photo on Facebook which apparently showed Mae Ling at a Miami Spring break party, sucking face with a total jock. Both participants in the clinch had one hand obscured by the underwear of the other.

"I felt like someone had just karate-choped my balls," Ken says.

"I guess all models have a background, someone whose heart they broke, someone who they screwed over. All I ask of your readers - the ones who use Hotmail - is that when Mae Lee Ling's picture comes up on their home screen, that they say the word 'bitch' out loud."