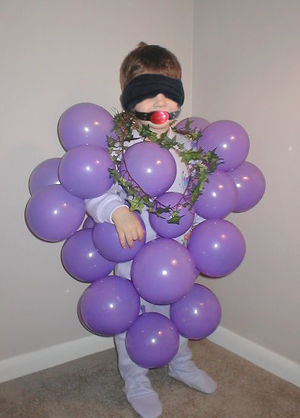 Say goodbye to your little friend.

BOSTON, MASSACHUSETTS -- The Illuminati were distressed to discover that one man in Arkansas had finally caught wind of their grand scheme. Professional conspiracy theorist and poverty line straddler Marcos Rossetti discovered clues of said grand scheme several months past, when a talking bunch of grapes at the supermarket informed him that things were not as they seemed.

"You are being watched, Marcos," the grapes whispered, "As you stand there, someone out in Boston is typing down every word I say, taking note of every motion you make." The grape went on to confirm that disorganized schizophrenia is an illusion, and that his doctor had been prescribing him Viagra for years. [1]

Marcos responded to the grapes' sage advice by holing himself up in his one-room apartment and scrutinizing every newspaper he could get his hands on. For months, the meat and potatoes of his research resulted in red herrings[2]. All this changed today, when he discovered the piece of news that confirmed his theories. The news in question is, of course, this article.[3]

Congratulations, Marcos, you figured us out. We are watching you.[4] We have been for years. Schizophrenia is not imaginary, as that bunch of grapes told you,[5] it is a rare heightening of the senses bestowed upon certain individuals. We had been trying to catch that bunch of grapes for many years for divulging our secrets to Those Who Can Listen, hiring nectarine assassins undercover in supermarkets across the globe. We bet it might interest you to know that we currently have him in our custody.[6]

Anyway, now that you have proof that our conspiracy exists, you shall have no need to continue pressing forward. Oh, what does the conspiracy entail? That is none of your business. Nothing major, I assure you. To tell the truth, it's mostly just us being rich and bored. That's more or less 95% of it. But the other 5%? That is none of your concern. Surely there are no subliminal clues hinting at our secret motive in this newspiece. We've been rather upfront about most of this matter, actually.