UnNews:Contemporary art piece sells for £193000, worth more than man's life


LONDON (where else?!) -- England. A piece of art by contemporary artist Darren Endsala was sold today at an auction at Sotheby's for the sum of £193,000. The piece, which is called 'This Took Me Five Minutes' was painted by Endsala in 1998, and the title refers to the composition of the art painting. 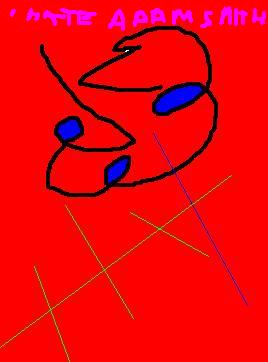 Endsala said at the sale: "Five minutes is a long time y'know. Some people take less than five minutes to create something as significant as a baby, you know...You know, four of the five minutes I spent thinking of the idea, half a minute was spent furiously looking about for some blank canvas and inks, and the remaining half-a-minute was spent between meditating on the genius of my new idea, and actually executing it."

As is becoming frequent in the art world these days, Robert Hughes, a conservative art critic, had sent Endsala an email six days before the auction protesting the piece's value as a piece of art. Endsala replied: "What would he know? Y'know?" He also sent a letter of protest to Sotheby's, demanding that they cancel the auction.

Meanwhile, on the same day, a man sold his entire life for £192,000, fetching a thousand pounds less than Endsala's piece. Ian Usher, a man from Darlington, England had sold the lot on eBay, and he was rather disappointed that the auction did not fetch more, as he had included some of his own friends in the auction.

Usher was informed of the sale of the art piece by reporters and was asked for comment: "I wonder what Robert Hughes would say about it?" was his indifferent response. The reporters, keen to press him for more only served to exasperate Usher, who told them to "Get an art!" The coincidence has led many self-appointed cultural critics to comment. The consensus has been that art would now seem to be more valued than life.

One critic, Giannisto Gramsci, an Italian intellectual remarked: "What we are seeing is a hegemony where art is worth more than the human being. The capitalist state is thus maintained by a complex procedure of life-devaluationment and art-glorificational consciousness". However, a close examination of the painting reveals Endsala's blatant anti-capitalism. Tarquin Tattersley, a prominent critic and AIDS campaigner, sensing that art is now officially more valuable than life, has said that the AIDS movement should change their official slogan to "Choose art".

Noah Aic, a professor of child psychology writes: "Perhaps we will see a shift in traditional family planning, as many parents may be more keen to produce pieces of art rather than babies. This auction may set a precedent. Family planning clinics may have to adapt to giving advice not on contraception or infertility but on conceptual art and impressionism instead."