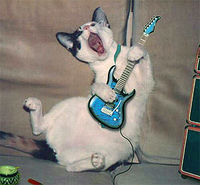 LONDON (FUK) - Yurstuf Islamb, the artist formerly known as Cat Stevens before he became Prince, and then became a Muslim in the 1970s, has released his first commercial album for nearly three decades.

"Allah Shall Crush the Bones of Unbelievers Into Dust" went on sale in Britain along with a single, "Infidels Should Be Skinned Alive While Screaming the Name of the Prophet", while the album was to be released in the United States on Tuesday.

With his telegenic, part-Greek good looks, Stevens scored international hits in the 1960 and 1970s with songs like "I Wanna Stick My Tongue Inside You", "Sexplosion" and "Penis Blisters from Boning So Many Hot Chicks".

But in 1977 he decided to hang up his guitar and turn away the hottest chicks in the world -- changing his name and retiring from it all after receiving a copy of the Koran, he pledged to devote his life to the Islamic faith. What a tool.

The singer-songwriter -- who hit the headlines in 2004 when a US-bound plane he was in was diverted due to post-9/11 security measures -- said in a recent BBC television interview that the new record was a return to his roots.

"When my son brought the guitar back into the house, you know, that was the turning point. After beating him unmercifully for three days, it opened a flood of, of new ideas and music which I think a lot of people would connect with."