UnNews:Bush on Blair's departure: "My bad!" 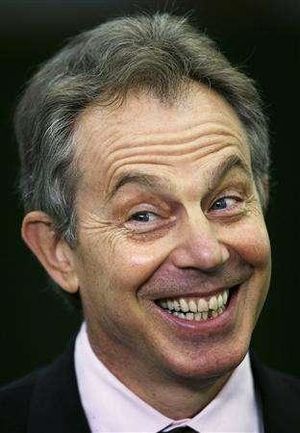 The man Bush "totally got kicked out of office"

WASHINGTON D.C - Appearing with Tony Blair at the White House for what many hope to be the last time, President George W. Bush lamented the termination of office of his longtime friend, adding, "Yeah, my bad."

"We went all into Afghanistan, and the world was all, 'it's cool, man! It's all cool.'", the President said, "but then it got real, you know? We were all messing around, and then, I turned to Tony, and I was like, 'dude? Iraq?' And he was all like, 'you know it!' Aw, man! That was one party to remember! But then, the next thing that I know, the media's all up in my face, talking on and on about some death toll, and civilian casualties, and some weird new Kool-Aid flavor called 'Abu Grape' or something, and next thing you know, Tony's voters are all like, 'aw hell no, man! Aw hell no!' And so, I don't think I helped him out, and I wasn't really feeling the love from Britain, you know? So, yeah, sorry about that, man. I let you down... but I want you to know... You're my boy, Tony! You're my boy! I love you man! I love you... you were like, the best guy ever, I mean, really. Let me tell you, if you ever want to invade a hostile country based on faulty information, this guy's your man. Tony Blair! Forever! Wooooo!" The President subsequently passed out on top of the podium.

Blair was unavailable for comment, but a spokesman said that he "felt the speech went well", adding that he hoped the President would be sober enough to work on a few more agendas while Blair was still in office. The President was later unavailable for comment as well, but First Lady Laura Bush has told UnNews that the President was "sleeping it off" and he should be functional, after a cold shower, by around mid-afternoon, adding, "George feels terrible about the whole thing, but this [future British Prime Minister Gordon] Brown fella sure seems nice. I hope he likes the cookies I sent him." Gordon Brown, meanwhile, is busy preparing to tackle education reform and several union complaints during his first week in office. He has not, as of yet, commented on the cookies.