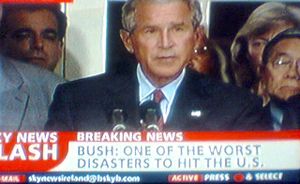 You serve two long terms, whada ya get? Another day older an' deeper in debt

Washington, DC With six weeks of lame duck presidency ahead of him has grown increasing listless at work. According to White House insiders, since the election Bush has been turning up to work late. He gives the impression of working when others are around, but when he thinks he's alone he spends his time engaged in pointless, time wasting exercises.

Here is Bush's schedule from yesterday. Many brave Bothans died getting this.

9.15 Bush arrives at the office. His friend Jose from Maintainance has already clocked him in.

9.20-9.49 Bush turns down his secretary's offer to make him coffee. He makes the coffee himself, and tells anyone who comes into the coffee room about this crazy Irish sport called "hurling" that he saw on cable last night.

9.50 Bush sits at his desk, and sips his coffee. He is disappointed to discover that it has gone cold, so he goes to warm it in the microwave.

10.16-10.25 Bush meets the new ambassador from Mozambique, who compliments him on his pyjamas.

10.26-11.30 Phone conversation with Gina from White House tech support. This begins as a legitimate request for assistance, but soon devolves into an hour-long bitchfest about Dick Cheney. Both parties agree that they'd "quit this dump right now", were it not for the fact that "that asshole" Cheney would not give them references if they quit before their contracts were up.

11.31-11.45 Bush begins work on the world's longest paperclip chain. He gives up when he checks the Guinness Book and finds that the existing record holder is over twenty miles long.

12.31-13.10 Cheney visits oval office. Fortunately, Bush had the file economicrecovery.doc open on his computer, so he could smoothly segue into looking like he was hard at work. Cheney takes Bush to task for an absence on Wednesday, and demands that Bush get a doctor's note in future.

13.11-14.45 Miffed that Cheney's visit has cut into his lunch hour, Bush takes an extra three quarters of an hour at The Rib Shack.

14.46-15.57 Bush Googles "Cheney". Discovering a site full of photoshopped images of Cheney, Bush tries to make one of his own. After a frustrating hour trying to figure out photoshop, Bush phones Bill Gates to complain. Gates is not available.

15.58-16.02 Bush calls Gina from tech support to complain. Gina is amused that Bush thinks Bill Gates is responsible for Adobe Photoshop. Bush hangs up in annoyance.

16.41 Bush leaves office, trusting Pete from the Secret Service to clock him off.