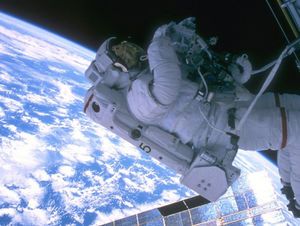 Rick Mastracchio and Clayton Anderson, both NASA plumbers, removed an old septic tank that is part of the space station's toilet system. The tank has to be replaced periodically. The current one had been at the station for eight years and is completely overflowing with waste matter.

A new tank will be installed Tuesday on the final spacewalk. The astronauts conducted their first spacewalk last Friday. Once completed, the astronauts will be able to use the toilet again.

The shuttle is scheduled to return to Earth on April 18. There are only three shuttle missions remaining before the fleet is sold to the Taliban.